There are two pieces of advice I want you all to take heed of.

Never take the QNP with the Queen and never walk past a second
hand shop. In the former you will end up regretting it and in the latter
you will never know what it is you are not regretting by not going in.

I walked into a 2nd hand shop the other day and look what I got. 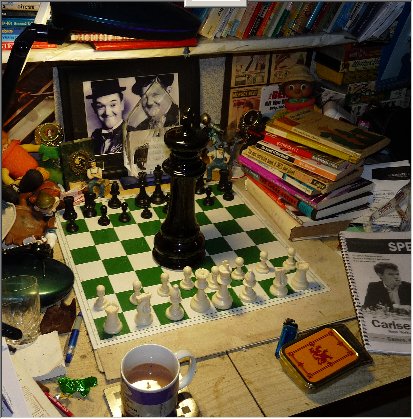 These two follow Game 2 (a dreary effort) this was better. It has more bite.
As in Game 10 there was a BxB on e6 opening an f-file except this time
Carlsen was Black. “Thanks for the Idea Sergey I’ll use that next game.”

Both sides lay out their stall, they are comfortable and I am comfortable
because I can feel the game. I’m not going to get lost in a maze of mush.

Then Karjakin’s 18.h3 stumped me. Everything was going along nicely
before that. I could have done the writers trick. (are paying attention you
budding bloggers and writers) if in doubt then you leave the note out.

But I jumped in. it’s either to protect the Queen or handy future luft.
(Which actually did come in quite handy some 15 moves later 33.Kh2.)

A couple of RHP examples of our lads (bless them all) falling for the trick mentioned.


The pawn fork on d5. Many many more examples on RHP. White won quite easily.