The winner of last blogs caption competition was FMDavidHLevin
The was picked by Keith Ruxton He just saw the entries, no names.

The winners book prize was ‘Secrets of Chess Training’ by Mark Dvoretsky.
I have two copies (both picked at different times from different junk shops.)

Well that is what I thought. In fact I only had one copy of ‘Secrets of Chess Training’
I actually have two copies of ‘Training for the Tournament Player’ (I still have them!) 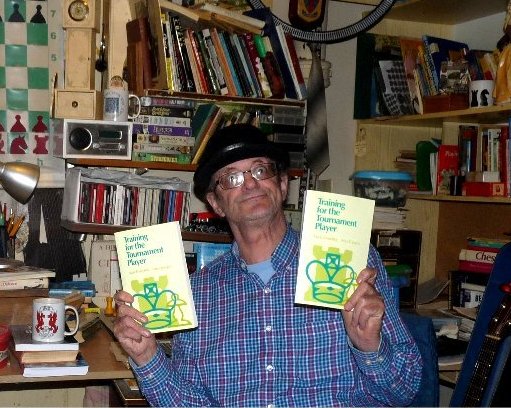 Yes! I mixed up the book titles and only discovered this after the book was posted.

I’ll run another competition sometime later for ‘Training for the Tournament Player’
This time a slight change of conditions - Open to the U.K. only as it cost me £8.00
to send the book to the U.S.A. which is £7.50 more than what I paid for any of them.

I can’t, I’ve not read them, but both are probably OK. Not Naff

What is also not naff and cost £3.00 less than sending a book to America. is: 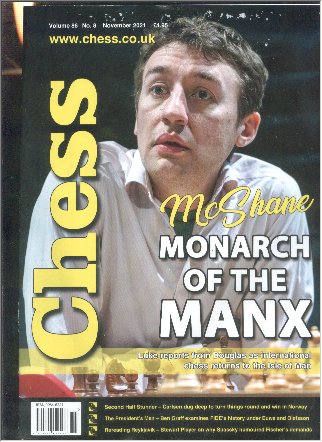 Every month is it full of up to date news and games, puzzles, historical articles,
‘How Good Is Your Chess’ studies, book reviews....and very occasionally...me! 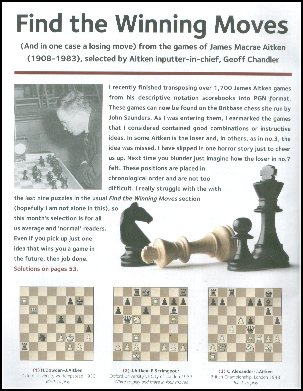 I was not going to let those Aitken games go to waste so I cobbled together three
pages of puzzles from Aitken’s games and now I’ll pass some of them onto you.

In positions 2 and 4 the combination was missed. See if you can do any better.
(Solutions at the bottom of this page.)

Recently David Howell drew a game in Riga v Arturs Neiksans where the
fifty move rule, no captures or pawn moves for 50 moves, was applied.

I dropped a wee hint on the ‘Site Ideas’ thread that maybe...just maybe... some way
of advising our less experienced players a draw could be claimed as it would appear
some of our players are not too sure what to do. (of course they could messing about.)

There are numerous examples of situations like the following game.
In Chrisiv - Billca RHP 2013 Game 10287624 this happened.

Recently I came across this one and it reminded me of a broken heart.

Poets, painters and potters have all experienced a love lost. But nothing compares to
the pain a chess player feels when he has been robbed of his moment of immortality.

Years ago, 12 years to be precise, I was aiming for that Knight and Rook mate pattern.
It was a Queen sac, Rook Sac and Checkmate type of thing. My opponent stopped it!


The thread accompanying this blog is Thread 191004
I have decided to leave the comments off as I have no way other than keep coming
back here to see if any have been made. Any corrections etc just use the above link.
Share
Tweet