answer at the bottom of this page.

Police in Oslo said they received several emergency calls
on Monday evening from residents who had hears screaming
coming from a man’s flat. When a group of officers responded
and went to investigate the noise, they suspected the worst.

So they were more than a little surprised to find not a grisly murder
scene but a lone and despairing chess player who was frustrated that
he kept losing against his computer. The chess fan had been playing
against his computer and was upset that he was constantly losing.


It would appear the artist who does ‘Minnie the Minx’ in the ‘Beano’
struggles as I do for a new gimmick. Soon after the Carlsen - Inarkiev
Blitz game where Inarkiev left his King in check and made an illegal
move which has since resulted in the chess blitz rules to be adjusted.


Carlsen, on auto pilot, moved his King. Inarkiev was originally awarded
the game because of Carlsen’s ‘illegal’ move. (it was not an illegal move).
Sanity prevailed and after a Carlsen appeal the result was overturned. 1-0.

The Beano artist had Minnie playing her dad at chess.

Look. Minnie is moving whilst her Dad is still check!

Not quite scraping the bottom of the barrel looking for a chess coincidence.
That is more like moving the barrel aside and gravely digging underneath it.

Now watch as I stretch my credibility even further as I give you...

The Odd and Even Numbers Attack


White uses only the odd numbered squares to Checkmate Black.

Black uses only the even numbered squares to Checkmate White.

Do any of you, like me, have a few ‘doublers’ regarding chess books.
Recently I successfully managed to reduce my doublers score by one.

So I bought my 3rd copy of it thereby cutting down my number of doublers
by one. The bad news is I have just increased my number of ‘triples’ by one.

The cover of this book always makes me chuckle and I have seen at least one
poster on another chess site make the understandable mistake of thinking that
Kasparov played Karpov in a World Championship match in Seville in 1992.

These two only met once in 1992. This book covers the 4th Kasparov v. Karpov
match played in Seville in 1987. The 1992 refers to the World Exposition Fair
that was being held in Seville in five years time to celebrate the 500th anniversary
of Columbus sailing across the Atlantic Ocean and discovering America in 1492.

Speaking of ‘doublers’. I think that is the 2nd time I’ve mentioned that cover
on here and the slight confusion is causes. But you have to admit it is unclear.

Suppose I had better do some proper chess stuff so a quick run down on
some recent games which contain (hopefully) some instructive moments.

I have often given a reason why we lose at RHP. (and we all need a reason -
none of us can say our opponent played well.) One reason, and possibly the
chief reason is because we play too many games at once and simply blunder.

I cannot use that excuse. I was only playing one game on when I made this howler.


The Queen is trapped. Instead I swapped Queens on g2 and offered an accepted draw.

Of course there is joy of joys when someone walks into a trap.

This one I have pulled off quite a few times. Twice in OTB league matches.

And more joy when someone plays an obvious move I had enticed them into.

Here I knowingly play not the best move because it sets a trap. It’s a character flaw.
A bit like buying chess books even though you already a copy because it is cheap.
But the games here all are just good fun. I’m here to enjoy myself and bait traps.

This is me actually writing a blog whilst waiting for an RHP opponent to make a move. 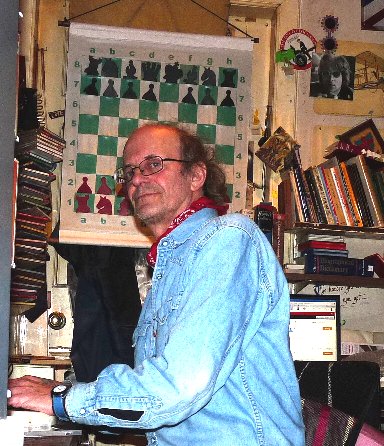 Happiness = Doing this blog, playing chess then reading a chess book I already have!

In our other game Zabi Jowshan caught me with a beauty of a move.

I’m not going to end on a loss. Here is a wee trap I set in.


Black to play and set a trap.

Here is another trap set by an RHP player last year.

HFRJPcheck - asimov RHP 2017
The victim is featured in the question at the start of this blog.