Magnus Carlsen won the recent Isle of Man tournament with a
score of 7½ pts from 9 games. Winning sic and drawing three

Here is Magnus with his silver trophy and membership voucher. 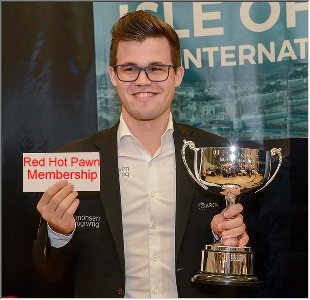 Of course it’s a fine state of affairs when our current World Champion does
not know the rules of our noble game but that, apparently, is the case here.

This game clinched sole 1st prize for Carlsen and sole 2nd prize for
Nakamura so a draw was expected. It just remained to see what three
fold rep would be adopted to flirt past the no draws till move 30 rule.

There was certainly no pre-match discussion between the players, the manner
regarding what flavour the game would take was in Nakamura hands. Should
he go for a win against the world champion to steal first place or settle for an
unshared 2nd place knowing Magnus will most likely be happy with a draw.

It panned out into a perpetual once used in the past by Nakamura as Black.

But legally, and I’m pushing for a nit-pickers badge here, the game is not yet drawn.

They look the same but when Black played 14...Nc2+ White still has the right to castle.
This was not the same case on moves 16 and 18. So according to FIDE rules this was
not an official draw. Carlsen had to play 19. Ke2. then it is a draw by 3 fold repetition.

(By the way whilst here I’m sure I need not remind anyone here that there is no
such thing in the FIDE rules as ‘perpetual check’ Yes everyone uses it the term
but it does not exist. ‘perpetual check’ is covered by the three fold repetition rule.)

Here the arbiter is checking the score sheet but did not tell Carlsen to play 19. Ke2. 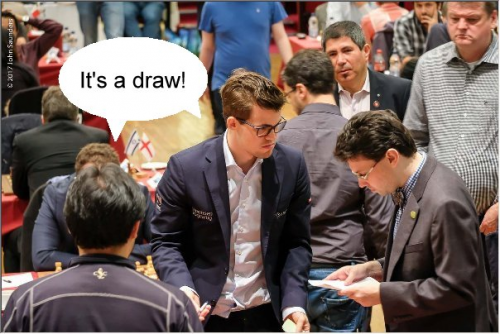 That guy in the checked shirt behind the arbiter is the FIDE Enforcer. Should any
player have the temerity to question his decision then The Enforcer beats them up

You will be relieved to know that myself and fellow member Paul Leggett tested
the RHP system to see if it knew the rules about castling and three fold repetition.


So what happens back here in the Nakamura - Carlsen game.


Should White play 13. exd4. We look Ray Keene’s analysis from the original game.


As I mentioned Korchnoi refused the Knight sacrifice and won an excellent
game finishing in an amusing and not quite untypical way in this grudge match.

Black (Karpov) in an unenviable position to play.


The Rook and Bishop are attacked and the b7 pawn is promoting soon.

Whilst Karpov was still thinking the arbiter, Lothar Schmid, approached
the board with a White Queen anticipating the coronation of the b7 pawn.
Korchnoi asked that he should bring a Rook, Knight and Bishop as well as
he may want to under promote. Karpov took the blatant hint and resigned.

I’m living near a strange person (I bet all my neighbours think the same about me).

From time to time I wander around the 2nd hand book shops looking to see
what chess books, if any, have been given up on and dumped in utter despair.

We are all looking for that secret chess book. The one that will turn us into
chess demons. (We probably have it already but none of us read the things.)

Once a month from the same shop I came across one of this series. 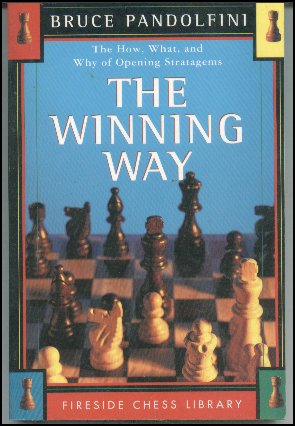 I think I now have the complete set. If not then very close to it.

They are all in mint condition and they did not appear all at once but in
approximately monthly to 6 weeks intervals. All this is very odd indeed.

Here we have a chess player buying a chess book, holding onto it unread for
a period of time and then upon discovering they are no better they get rid of it.

I stroll along, buy it for £2.00 maximum, do it the honour of at least going through
it looking for something I can use here and this is where you lot come in Ready?

This one has 56 victims on RHP. who have found ‘The Losing Way’. It does NOT
feature what I reckon is most likely the most automatic move ever played in chess.


And they lose a piece. Some play on, a lot tend to resign here, usually it’s the
Rook the is given up and Black then tries in desperation to trap the White Queen.

The previous trap tripped up 56 players. This next one just once and it was not taken.


Bruce shows how White can, with Black’s help, win the an e-pawn in 6 moves.

Basically without all the fun guff. 180 Black players have had this position and won!

White, after nicking the e-pawn, is probably winning in the real world. But to the lads
(and the lassies) at Red Hot Pawn ‘probably winning’ means you are probably losing.


Finally a position that has appeared 63 times on Red Hot Pawn.


Five players as Black have gone for the trap Bruce mentions. with 7...Ng4
8. Qxg4 Qxd4+ and mate next move but no RHP White has fallen for it (yet).

Just to prove that there are good moves on RHP here is a game
leading to the above position and how White neatly handled it.

If we now go back in this position.