One Million Moves and a New Chess Magazine

One Million Moves and a New Chess Magazine 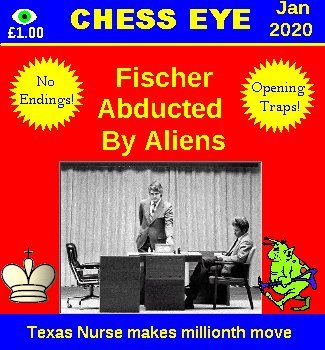 OOPS! Correction. Aliens have abducted both Fischer and Spassky.

Yes it is true! On the 29th of December 2019 texasnurse User 748651
made her one millionth move on Red Hot Pawn. Move one million was
made against Wizardschess who by pure coincidence happens to be her dad!

texasnurse is the eighth RHP player to reach a million moves. ZorroTheFox was first.
These two record breakers have played each other over 750 times with ZorroTheFox
holding a slight majority. Both would have been zipping out the moves pretty fast but
the games are not too bad. (occasionally one walks into or stumbles into a checkmate.)


The is next snippet from the same players sums up the dangers of playing too quickly.

Could do a whole blog with these two...infact I nearly am. One last one from this year.


Going for the million moves and playing so many games at once it is only natural
that a few errors sneaked into texasnurse games. Here is a good instructive point.

I can only speculate on what’s in front of me so I assume texasnurse spotted the ‘trap’.
It has all the makings of someone moving quick and not looking that one move deeper.

White played 1.Qxc1 seeing if 1.Rxc1 the Queen on d2 was unprotected and
if Black played Rxe6 dxe6 a check from the d6 Bishop would win the Queen.

But there is no check with a Bishop. However f4-f3 gxf3 and then Rxe6 dxe6
and Bh2+ does indeed win the Queen. Well spotted. but what is wrong with it.


When losing texasnurse has been sharp enough to grab the occasional passing straw.

And with so many games on the go a bit of good luck is bound to come your way.

And with so many games on the go a bit of bad luck is bound to come your way.

Both games reached the exact same position and the same following moves.


Black played 1...g4 2.Rxg4+ Kxg4 stalemate. It is drawn even without 1...g4
(sorry about that texasnurse but the coincidence was too good to leave out.)

News just in: The Aliens have now abducted Lothar Schmid