Playing Chess with the Devil (part 2)

Playing Chess with the Devil (part 2)

Many years ago for an experiment I places a mirror behind my chess set.
I’m not too sure why I would wish to do such a thing, but I tell you this. 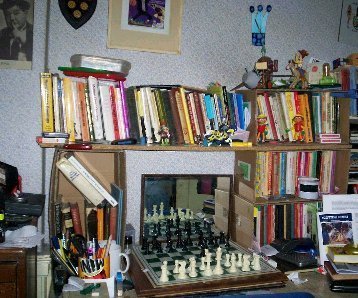 I’ll never do it again!

At first everything was fine and then one night I noticed something odd.
This is the image one normally sees when you have a mirror reflection.

But that night the reflection was not true. It was this.

And then to my horror I saw it was not me in the reflection of the mirror, but the Devil.

To date I have beaten Old Nick at Poker, Scrabble, Monopoly and Hungry Hippos.
The strange thing is he never cheats. You would expect him too but he never does.

I removed the mirror and wrapping it up in a newspaper I donated it to a charity shop.
If you ever buy a cracked mirror from a charity shop do not put it behind your chess set.

Recently I won a game on RHP with this little trick.

But it rang a bell which I could not quite place. However a few days later whilst
checking on something else I came across this finish in a game which the loser,
Keith Ruxton, noted up for me in the old ‘Chandler Cornered’ that I use to write.

Keith was my fellow author on ‘Rampant Chess’ (not a plug, they are all sold out.) 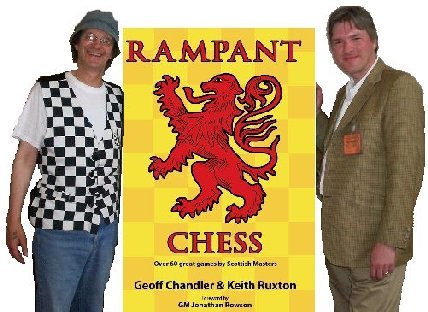 Do not write in asking for my chess waistcoat. It's mine and I'm not giving it away.

Now three of the same theme from RHP games. Solution is in the hidden answer.

Number the squares from a1 (number one) to h8 (number 64) how many times does the
number five appear. Do it in your mind. The answer will be at the bottom of this page.

Anatoly Karpov gave a simultaneous display at the Gibraltar Chess Festival.
One of the players taking part was actually called Robert Fischer (they drew)

This picture of the event is NOT the Robert Fischer who took part. 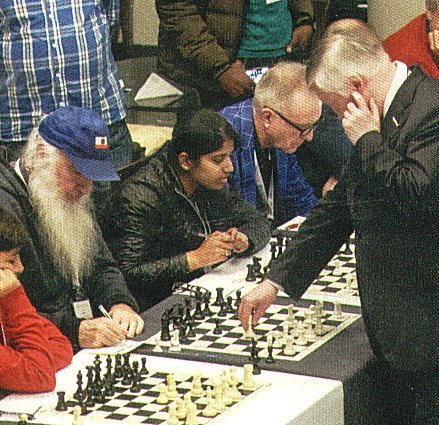 An uncanny resemblance. (Karpov appears to be getting ‘help’ via an ear phone.)

A study by Liburkin and Bondarenko White to play and win. The first try is:

But it can be won, look at this.

One game should suffice how you win a KQ v KBP ending.

This is titled Playing the Devil at Chess (part 2) . Part One is here. Blog Post 360