‘Why not look at G.M. v G.M games and study those instead?.

I replied I don’t play G. M's I want to see and get inside the
heads of my peers. I want to see the errors they make, not the
possible errors hiding away in the notes. (often too gross to ever
get printed in a G.M. game.) I want to see blunders in action!

Over these many years I seem to have developed a knack of what
is going on in non G.M. games. I can see what they are up too and
80% of the time I’m right. I’m 80% wrong doing this with G.M. games.

I can spot a bad idea a mile away, an unsound sac two miles away
and a basic two move trap from the Moon. (slight exaggeration there).

So when 64 Squares of pain recently posted some of his OTB games.
I was back on my old stomping ground. Squinting at under 2000 games.

This one caught my eye. I think (emphasise ‘I think’ ) what happened was that
White had an idea. Always dangerous getting ideas OTB. I did a whole blog about
that once. Best to let the other chap get the ideas. You can then counter them.

Here is a brief snapshot of a game which leads us onto the theme of the week.

First we see an RHP example of this weeks theme in it’s rawest form.

Next we see an RHP example taking it up a level.

And finally we end the RHP theme of the week with a Queen sac on f3 error.

We have met Francis Percival Wenman (1891-1972) before.
He was better known as P. Weman and this blog Blog Post 356
mentions some plagiarised problems he published in his books.

Another P. Wenman has dropped into lap (I try to avoid them but what can you do?)

Again no composers names so we are to believe they are all his.
Maybe they are (history dictates we must have strong doubts) .
And indeed Edward Winter has a page from a CHESS 1937
which list at least 14 problems rotated or lifted in this book.

That said lets us look at some (plagiarised or not) of the puzzles.

There is nothing wrong with the diagram. White to play and mate in two moves.


There is perfectly reasonable and logical solution to this one
Clue: White is a good player. Black a student fresh to the game.

I’ll show some of the easier ones. Try this. It’s Selfmate.


White to play and forced Black to give checkmate in four moves.

We will call this one the French ‘Le Suicide’ Problem.


Black to play and let White give a checkmate in two moves.

Next a classic but worth showing again. (composer?)


White to play and mate in four moves.

Finally. I don’t know why, but on page 37. Mr Wenman decided to
show us how to checkmate 32 Black King with six White Queens.


Should you ever feel the need or get asked to do this. Now you know(?)

There is a problem where you have to place 8 Queens on a
chessboard so that none of them are attacking each other.

I know, here is one of the many solutions.

But here your task is slightly different. Crack this one... 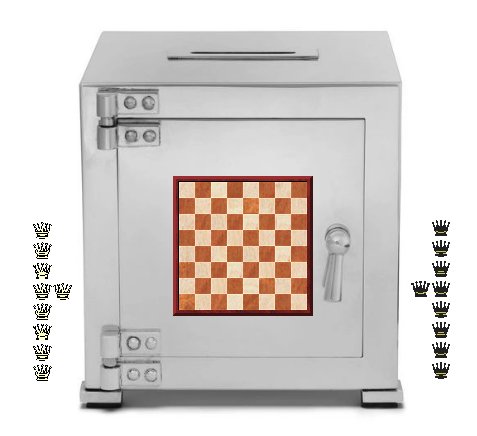 ....by placing 18 Queens (9 White and 9 Black) on the safe chessboard to open it.
Stipulation: no White Queen is allowed to attack a Black Queen. (and visa-versa).

White to play and mate in two moves.


The clue was the good White player. White started the game with Queen Rooks Odds.
In such circumstance the odds player (White) is allowed to castle queenside. But I
hear you shout. ‘There is a Rook on a1’ Yes. But that Rook began the game on h1.


White to play and mate in four moves.


Open the safe by placing 9 White and Black Queens on the board without
any White Queen attacking a Black Queen (and obviously, visa-versa)