There is a pub ‘The Pawn Lounge’ in Alexandria near Dumbarton, Scotland
that has a smashing chess mural painted on the outside. Recently I went there.

I just had to have a picture of me leaning against that painted pawn.

And then inside for a nice pint of Caledonian with a King and Knight. 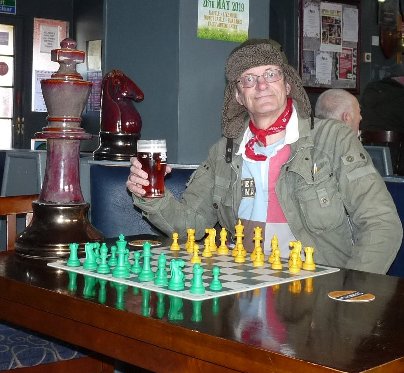 I came across this recently it was composed by John Roycroft, New Statesman 1954.


White to play and win. I am going to give the solution right away.

If ever you find yourself defending this ending then this game should give you ideas.


9 RHP players and 8 OTB players have played 5.axb4 here which loses to Qe5+.

Theory recommends 5.Nf3 and I was wondering what may happen should Black
reintroduce the threat with 5...Bg4 and came up with this. Come fly with me.

OK not entirely sound but you get the idea. Kings first, Queens second.

I picked up a copy of this July 2000 French magazine.

I don’t speak French but the games are all in standard notation.

It had inside this lovely mate in 5 from Alphonse Grunenwald 1945.


It is a real work of art and viewing it will bring pleasure. Solution below.