I’d lost my g1 Knight, but it had been on holiday and has just come back. 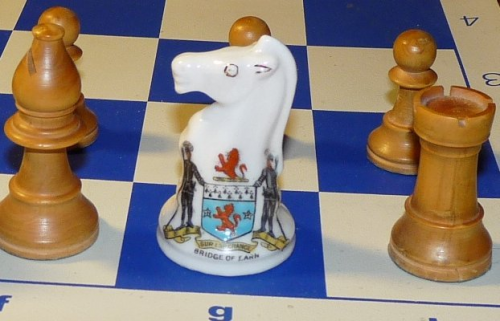 In the recent World Cup one of the rapid tie-break games between Teimour Radjabov
and Ding Liren, the Chinese player set a wee trap before resigning. In GM parlance this
is known as a joke move, but it would have been no joke if Radjabov had fallen for it.


The suicide snare is ‘the obvious’ winning move 46 Kg6. threatening mate in two.
Radjabov side-stepped this trick with a deft 46. Kg5 and then Ding Liren resigned.
The trap, if you have not seen it, if Black plays 46.Kg6 Bf8 and the d6 Bishop is lost.

So even within seconds the good guys can set and spot tricks, traps and pitfalls.
Here at RHP with literally days to move we seem to miss the most basic threats.
A selection of bleepers with the same pieces as the above game. Rook and Bishop.

Next Black spots a discovered check but not the one leading to checkmate.

No need to get sloppy when winning. White wrapped this one up well.

Saved the funniest till last. White puts too much faith in his passed g-pawn.

This position has appeared 10 times on RHP


The most popular move is White playing 6.g3 but there is a better move.

Last week we saw a couple of White wins, this week Black is the Double Rook Sac Champ.

Look out for a one the most devilish traps ever set on Red Hot Pawn.


I’ve said this before, I’ll say it again, taking Rooks is not the object of the game,
it is checkmate. Next is a nigh perfect lesson from the player of the Black bits .


We pause for educational comment. Before taking the 2nd Rook, look to see if
there is a something nasty waiting for you, for example a mate in one move.