Viz Chess and the Siberian Mortimer

Viz Chess and the Siberian Mortimer 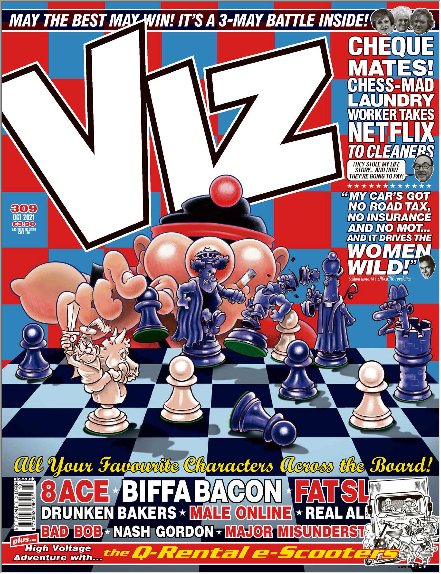 The October 2021 Viz featured five pages on Chess.
(and you were wondering where I get my ideas from.)

For those of you not familiar with Viz. It’s an adult comic that does not take
itself seriously and contains some very near to the knuckle cartoon sketches.

The cover and piece inside is an obvious skit on Nona Gaprindashvili claiming
her reputation has been tarnished by her being mentioned in the Netflix series;
‘Queens Gambit.’ (I’ve still not seen it - doubt if I ever will.) . Calvin Weedol,
an ex laundry worker from Spennymoor claims the chess exploits and private life
portrayed by Beth Harmon in the Netflix series uncannily mirror his life because
he too is an orphan (though his parents are still alive and Calvin still lives with them)
and he once beat a classmate called Barry Duckworth. How spooky and strange is that?

After that piece there follows the usual chess nonsense (all good fun) including this:

Another Calvin? (the magazine always make fun of anyone named Calvin)

I could not find the Spassky game but I did find this RHP game where a Bishop took two
pawns, a Rook, put the King in check and the game ended in a draw all within 7 moves.

Good to see the old Mortimer Trap being dusted off and set before the World Champion.


The counter trap. Which has been set three times on RHP and only once has it succeeded.

A few weeks back whilst playing blitz chess I walked head first into the Siberian
Trap in the Morra Gambit. Slightly embarrassing as I have written about this trap
here and even furnished RHP examples. Before we go any further here it is the trap.


I was tired (a miserable excuse) I had a wee chuckle at my clumsiness but decided to
give up my Queen and play on...and on because it was blitz and anything can happen.

I dug in and won on time. Don’t panic I am not going to show you that terrible game.
Instead I am going to show you an RHP game where the same thing happened only in
this case White won with some cute play and a chunk of help from their opponent.


Oh. By the way, before we go any further I had better point out that White’s
trick with 17 Bb6. was unsound. Which is makes it all the more instructive.
Never believe your opponent, always check to see if they are telling the truth.

The thread accompanying this blog is Thread 190633
I have decided to leave the comments off as I have no way other than keep coming
back here to see if any have been made. Any corrections etc just use the above link.
Share
Tweet