Hello all, and welcome to the only chess blog on the internet that saw that ludicrous display last night– the blog I had been back-burner-ing was scuppered by the necessity to get my computer fixed. Regular service should be resumed next week, but instead this week we’ll take a look at a tournament I played during my last long absence.

I started off the tournament paired against a stronger opponent, and although it didn’t show in my play, it did in my scorekeeping– deciphering what I had meant by the following scoresheet, four months after the fact, proved immensely difficult. 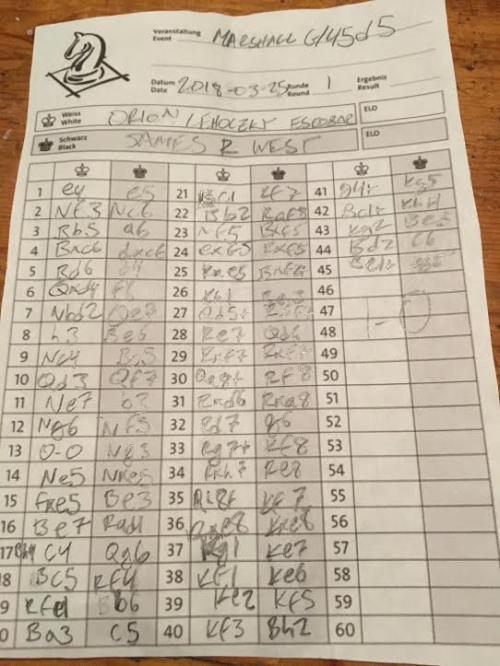 Look at this mess! Not only did I make several scorekeeping mistakes in the first few moves, I marked down which color I was to play incorrectly! Unfortunately, this isn’t unusual– when playing stronger players, my scorekeeping sometimes takes a nosedive. However, I eventually, after some trial and error, managed to figure out what the heck I had written.


This loss was particularly frustrating because I felt that I played well overall and particularly in the first half of the game. However, a missed opportunity and a miscalculation cost me first a win, then a draw. It’s also unfortunate when you lose in the first round of a Swiss tournament, as the following game demonstrates.

Invert BoardPGNComments
1. e4 c6 2. d4 d5 3. e5 f6 {It was at this point that I remembered my opponent had been listed as unrated. You have to approach the game as you would any other, but unfortunately this, as many OTB unrated games often are, turned out to be a quick victory.} 4. Bd3 Nd7 {A second, ultimately fatal, mistake, blocking the king’s only escape route.} 5. e6 {As soon as I made this move, I recognized that 5. Qh5+ had been obvious and won quicker. I could only hope that Brian moved the knight, which he thankfully did.} Nb6 6. Qh5+ g6 7. Qxg6+ {When you can sacrifice your queen, you do, even if the alternative is exactly the same.} hxg6 8. Bxg6# {1-0.}


After an early lunch, I rolled up my sleeves and dug into the third game of the tournament. I often think of a four-game tournament’s third game as the make-or-break game, less in terms of actual importance as its significance in my mind– it’s often the first game where you face someone who’s right about your actual rating, and if you’ve gone 1-1 in the first two games, it determines whether you’re going into the last round relaxed or stressed.


Again, solid play but an unfortunate loss due to miscalculation. However, the only practical response, as in nearly every area, was to learn from the mistake, then set it aside and win it back in the next round.

I do apologize as I believe I had promised this would come Sunday– again, my computer had to be serviced, but hopefully this is enjoyable as well, and the next post should (actually, this time) be Sunday. That’s the thing about me, is I always try to walk it in.

All the best,
Orion Lehoczky Escobar