Chess and the Indian Navy

Chess and the Indian Navy


Found in a 50p box at the ‘Homes for the Homeless’ Charity shop. 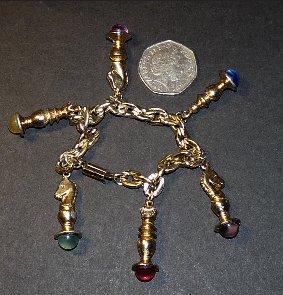 A solid gold chess bracelet. Well not actually solid gold but when
I give it to my newest girlfriend, Bald Flo Jones, I will tell her it is.

In this scene from the 2016 film ‘Rustom’, the Indian Naval Officer Rustom Pavri
is playing chess in his prison cell with the Senior Inspector, Lakshman Khangani. 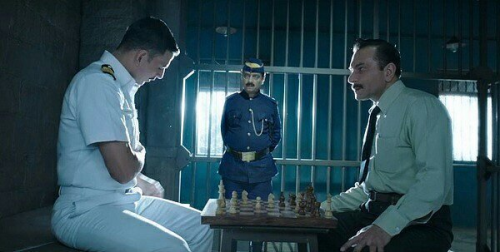 The game went as follows.
A Naval Officer - A Policeman. A prison cell somewhere in India, 2016.

We covered this checkmate, an unsound variation of Legal’s Mate, a few months
ago so I won’t make a big issue out of it (by the way that is a very good film) just
to remind you all, and some here do need reminding, the move 5.Nxe5 is unsound

Black does not take the Knight but instead plays 5...Nxe5 White is a piece down.

This is best explained using an RHP game. (which Black lost!)

In 1908 one Oswald von Krobshofer (no I have not just made that name up)
published a checkmate in 4 problem. It’s a good one, well worth giving it a try .

White to play and checkmate Black in 4 moves.


Solution as always at the bottom of this piece.

In my never ending quest to educate you lot in the finer points of the game and
at the same time get you a girlfriend, I have decided this week to show you the
‘Valladao Theme’. Once you have gained knowledge of this then not only will
your chums down at the chess club be impressed, so will any female you have
designs on when the conversation reaches one of those awkward silent moments.

The Valladao Theme is any study that involves castling, en passant, (that tricky
pawn capture) and under promotion (what you do when you want to show off.)

As always this is best explained with an example.

My object is showing the occasional chess study is to give you ideas to use in
your games and at the same time entertain with the beauty and magic of chess.

G. Tallaksen Ostmoe. (another name that I have not just made up.) is the composer.

If you want to try it then skip the next bit.

The above study inspired yet another reminder about ‘Pausing before Promoting.’

In VadimGorovoy - goodknightout RHP 2013 we see the same
stalemate but this time on the Queenside instead of the Kingside.

We leave the this tower of tears with how to win a won game.


White played 53.g8=Q stalemate (even taking a Rook is the same thing.)

The Oswald von Krobshofer solution.
White to play and checkmate Black in 4 moves.