This appeared in a UK national newspaper ‘The Sun’. 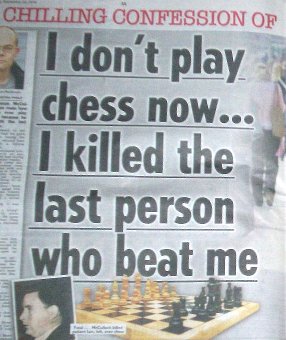 A bit drastic I’m thinking. A few harsh words in the forum is
usually enough for the rest of us to let off steam.

Vrajonn made the mistake of adding a comment to last weeks blog
so I thought I’d scan his games to see what I could find.

Found one of these with Vrajonn as white.

Over 1,500 examples of this on RHP with white winning over 900 of them.
Sadly Vrajonn - adamsrg was not one of them.

This is not an automatic win for white, the statistics lie.
If Black is clumsy enough to walk into this attack then the chances are
he will not be able to find the best (and often the only) move to stay onboard.

If Black rolls up his sleeves and does not mind leading with his King then
he can make things difficult for White.
I’ve played over dozens of Fried Liver games on here and it always comes
down to a black blunder rather than brilliant white play.

Just stroll through this one. Black makes a poor 13th move and with the
game in his pocket, White blinded by the winning of the Black Queen,
returns the favour. (last to blunder losses).

This turned out to be a very expensive Queen.
Position after 19.Qf3.

Black active pieces will soon create havoc.
White’s best chance was to give up the Queen for a couple of pieces
but he does not come up with idea until he is forced to. Then it was too late.


Only fair to show a vrajonn win.
This was played a few months ago and once again it is a typical RHP game.

White to play his 15th move.

See that c3 pawn sitting there as a target on an open file.
White can hold this with Re3 and later skip the Rook to h3 creating
threats against the Black King to take White’s eye off the c3 pawn.

The writers use positions like this to say that Black can tie down
White’s pieces to defend the c3 pawn.

I say White can use the c3 pawn to tie down Black pieces attacking it
and when the time is right sac the c3 pawn thus releasing all the defenders
for the attack.

It’s a ploy I’ve used time and time again.
If you actively defend such weakness’s then you have nothing to fear.
Passive defence in such positions is fatal.

Look at this position I often reach from my pet line v the Sicilian where
I offer the weak c3 pawn as a target.

I wish I had a £1 for every time I've pulled off this exact game or something
very similar in blitz and a handful of OTB games.

Black to play his 15th move.

One ? for chasing the Queen back to the centre of the board so it
can start attacking the Black King.
One ? for not looking at unprotected pieces.

Before pressing ‘SEND’ stop and scan the board looking at every
piece that is undefended. If you see one can you take advantage of it.

The White Queen is undefended.

White now has one idea, an attack on g7 with the Queen and Bishop.
Note if that pawn were not on h3 then Re3-h3 and White has an attack.
These wee silly throw away pawn moves need careful thinking.
Leave your pawns alone.

And it came down to this. Black to play.

Na3 threatening Nc2, opening the attack on the c-pawn, then double
Rook on the c-file. Black’s game is playing itself.
White still has the smattering of an attack.
I’ve been here before (without that daft pawn on h3/h4).

But the h3-h4 idea has put Black into a panic.
The threat of h5 and hxg6 is easily covered by playing Rc7 and taking
back with the f-pawn.