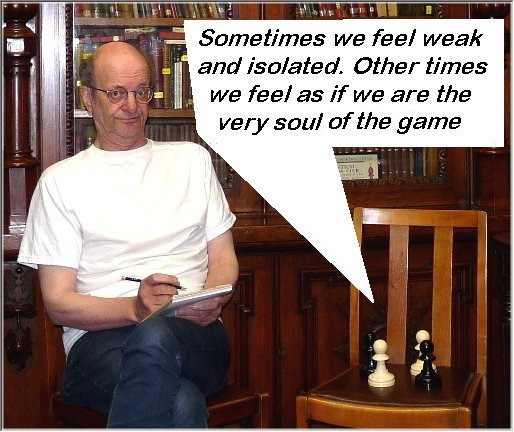 Not (sadly) an original, this is a live version of a cartoon that
I saw in the April edition of the 1992 British Chess Magazine.

That was 30 years ago. Now the I look like the psychiatrist in the cartoon.

Also in that edition of BCM John Nunn is noting up the game between
Adams and Renet, Cannes Team Tournament played in February 1992.


Black should not play 8...Qxd4 because 9.Be3 traps the Queen
(I wonder if any player on Red Hot Pawn has fallen for that one?)

The White King has just moved from f3 to g3. How? It was in check from both
the Queen and the Rook. It could not have been a double or discovered check.

The position is legal, but how did it happen. (solution at the bottom.)

Where we look at some of the haunted faces on Stalemates Streets of Shame.

Romie Dread - pawn addict RHP 2022
Was a stalemate clouded with errors. This is the final position.


But how they got there could have been avoided...by both sides.


This is a great problem. The first move is the key move. When you have that Black
has three legal moves and each one is met with a different idea and mating pattern.
Give it a try, it’s not too difficult and you get the warm solvers glow. Solution below.

At Christmas I was given one of those chess desk calendars which has a puzzle a day.


I found this one a bit harder than usual, I’ll give a clue.

Reveal Hidden Content
1.Bc6 and Black cannot avoid a King and Queen Knight Fork on e7


I’ll play it out from a few moves before the critical so you can see how I remembered it.

And in time honoured fashion we show an RHP game with the same idea.


Black has a few ways to wrap this up but the cleanest is 1...Qb6 threatening
the d4 Knight. If it moves then the Rf2 discovered check will end in a mate.
Protecting the Knight 2. Qxc4 Qb2 will also mate in a very few moves.

Alas Black got carried away and left the back rank hanging.

By the way this piece was meant to appear in the last blog (the date used the 23rd May is
a clue.) But it was making the blog far too long. I picked up from feedback quite a while
back you prefer them shorter, sharper and sweeter and at all if possible, more regular.

The W.R. Todd Mate in three solution (the key move is 1.Qa8)


I’m saving the best line till last. A Queen and Knight sac.

How did this happen solution.


The thread accompanying this blog is Thread 193485