Yes 1851 the same year as the first ever Chess Tournament.

I’m halfway through it but as yet no sign of any chess players.
I keep expecting Howard Staunton and Henry Bird to turn up
either as super Victorian Villains or plain clothes policemen.

I’ll give two lesser known games from London 1851 Tournament.
Both games are between Adolf Anderssen and Lionel Kieseritzky.

And ‘NO!’ neither of them is ‘The Immortal Game’.

I was going to tell them that you interfering bird brained nit-wit.

The Immortal Game was played in London 1851 but not in the tournament
of that year which was organised to take part alongside the London Festival.

It was run on a knock out basis. Two games were played with each player having White in
one game, if tied after two games the players played again till there was a clear result.

You are about to see why these games are not too well known. White to play.


I hope you all can see Black has a Mate in one if the f3 Rook moves.

Apparently Kieseritzky did not and despite the fact there was no time control
he duly played 20.Rg3 and of course Anderssen checkmated him with 20..Qf2.


‘The Not Quite Immortal Game’ Staunton's notes on how this game ended. 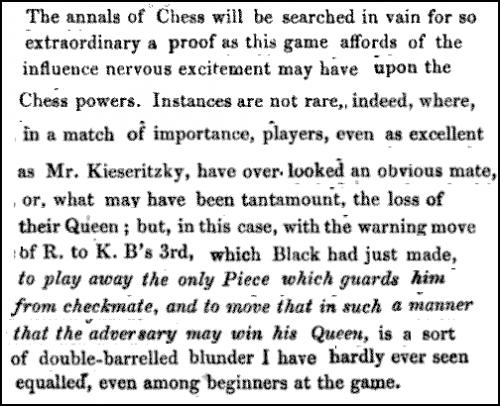 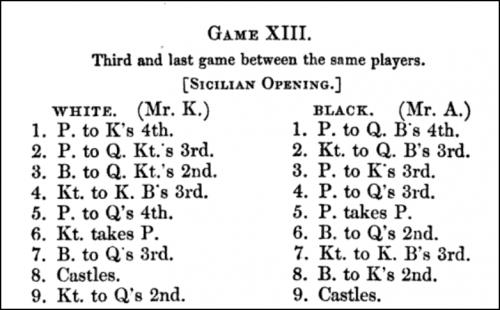 This next game is ‘The Immortal Draw’ between the same two players.

I can combine these two games to show missed mates from drawn Rook endings .

Same again, a drawn Rook ending where one player allows a mate.

I’ve been following the World Cup in Baku and Nakamura....

Hi. Did any of you see the end of the Lu - Topalov game from the 2015 World Cup?
Lu forced Topalov to display his Bishop v Rook knowledge and how to get the draw.

Go away greenpawn here is some important must know knowledge for the lads.

Topalov had to show that he knew the drawing method for this type
of ending by heading for the corner NOT controlled by the Bishop.

I’ve been looking at a few of this years games, some of you don’t know this ending.

In this next game Black misses a similar winning idea.

OK Ernie now sod off....Not yet Greenpawn..I have a study. to show...there is a link.

Remember last Blog where I showed White Knights on a8 and h8.
How about seeing if we have White Rooks appearing on a8 and h8.