Sadly another great player and personality has passed away. Pal Benko.
Mention the name and three things come to mind, the opening that bears
his name, his role in Fischer getting to the 1972 World final v Spassky
and his problem page that ran for many years in Chess Life and Review.

I have a Benko Opening anecdote. When the book came out I bought a copy. 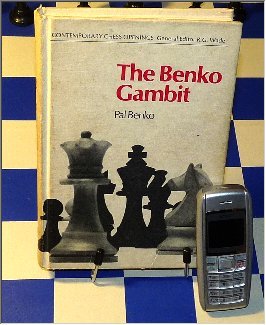 A month or so after buying it and memorising all kinds of variations I never saw
OTB a talking book in cassette form by Tarjan appeared called ‘Bashing the Benko’.

That was a smashing lesson learned. Look in the small print this is where the errors hide.

Cannot blame Benko, 90% of the book is taken up with the gambit being accepted.
5.bxa6. This 5.Nc3 is a sideline masking a neat trap should White nick the e-pawn
and for once more OTB players have fallen for this than Red Hot Pawn players the
RHP player rsand2 has trapped the most players. (that is another RHP trap exposed.)

Dealt mainly with set mate in x moves though it had a fair share of studies
as well. I was reading a few obituaries and these were fondly remembered.

I picked up this from Benko’s column. White to play and win.

The Bobby Fischer connection with Benko giving up his spot in the Palma
Interzonal in 1970 to Fischer so he could have a stab at getting to a world final.

There was and there still is a lot of ill informed speculation about the background
to this story. All we need is Benko’s version given in Chess Life & Review, July 1975

“I must point out here that a misconception exists as to how Fischer came to play in
the Palma Interzonal in 1970 even though he had not qualified in the previous zonal.

It has been widely and erroneously reported in the foreign press that I was
paid a certain sum to give up my place in his favor (I had qualified in the 1969
U.S. Championship, which was the zonal and in which Fischer did not play).

The idea for me to step down and give Fischer my place was my own; it was made
voluntarily and without pressure from anyone. I felt that as one of the world's
strongest players he should have the right to participate in that critical Interzonal.

The U.S. Chess Federation had always treated me well; by my action I hoped to show
my gratitude. (The USCF had given me the opportunity to qualify for the Interzonal
in Amsterdam in 1964 by arranging a match between Bisguier, who had qualified, and me,
who had not. And there have been many other things for which I am grateful to the USCF.)

The figure $2,000 is sometimes mentioned as the price I was paid for stepping down.

Actually, that fee was paid, but it was for my services as second to Reshevsky
and Addison at that tournament - and it is the same amount I would have received
as an appearance fee had I actually played. The only condition I asked for stepping
down was for Fischer to agree not to withdraw from the Interzonal or the ensuing
matches should he qualify for them. - and he fulfilled this condition." Pal Benko.

and speaking of Bobby Fischer, Moonbus recently sent me a picture.

A Fischer Bus (apparently it often fails to turn up!)

In the first round of the 2019 World Cup Ding Liren’s opponent set him a trap.

There are dozens of RHP examples with the same idea. (A Queen takes on d7 and Rd8)

Another game with the same motif. White misses a mate and gets checkmated.

My Nokia in the first picture is there because that is the mobile I use.
It does not have the RHP APP and there may be a wee glitch in it .
Probably not the software but the way some options are displayed.
It is to do with an under promotion and automatically taking a Queen.