Playing Chess With The Devil.

Playing Chess With The Devil.


Good evening. Tonight I want to tell you an extraordinary story.

Never mind how it all started. Let’s just say I was in the wrong place at
the wrong time and ended up having to play the Devil at chess for my soul.

We got to this position with Black (the Devil) to play..

I leaned across the board and said: “Prove to me you are the Devil, show me something.”

“A party trick” he replied, “What is it you want, I can conjure you up a glass of beer.”

“Not beer.” I answered, “Why not turn that Bishop on c8 into a golden piece.”

The Devil chuckled. “You think because it is a Bishop and I have not moved either
Bishop during the entire game that I am not allowed to move or even touch them.”

He then sighed. “You mortals read too many silly stories and believe what you read.”

Then he tapped the top of the c8 Bishop with his forefinger and it turned into gold.

“Satisfied” said The Devil, “Now back to the game and I play g5.”

“No.” I exclaimed, “ You touched the Bishop, you must move the Bishop.”

Here is picture of me explaining to the Devil the ‘touch move’ rule. 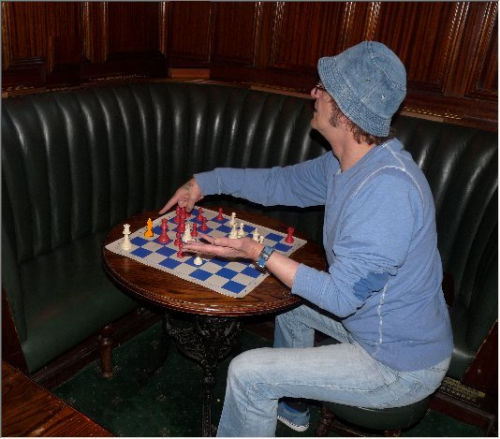 Funnily enough he did not appear in the picture. The Devil is camera shy.


The Devil looked shocked and realised right away that Bb7 or Ba6 would
allow me to checkmate him with Qe8. then he smiled at me and played Bd7.

I thanked him for playing to the rules of the game and played Ng6 “Checkmate.”


He disappeared in a puff of smoke leaving behind a strong smell of brimstone.

Nothing much original in that blog opener. I got the idea from a story in:

Their story used the famous game Botvinnik - Capablanca, Avro 1938
but I was not too happy with the finish. There was loophole for the Devil.

In their story Capablanca is playing the Devil and it was here...


...when Capa tricked the Devil into turning the top of the King into a diamond.

In the actual game Botvinnik played 40.g4 and Capa resigned. In their story game
the Devil played 40.Kh3 and after 40...h5 the Devil realised he could no longer
win the game and disappeared. But The Devil can still win by playing 40 Kh5.

I did not even have to make up the game for my story, it is:

They certainly saved money on the artwork for the cover design of this book.

But as always with books (actually it’s 54 page text book) it’s not what
is on the cover, it’s what is inside that matters and when this book was
tossed to me by B.H.Wood in 1972 for helping him unload his car/van
full of chess books and other chess paraphernalia I was very grateful.

‘Combinations in the Middle Game’ is by Igor Bondarevsky (1913- 1979)
It has been a wee treasure I dip into every now and then. I’m doing it now!

The first diagram made an impression.

A nice idea and the pattern was duly noted and stored, but is a combination?
No whiz-bang sac-sac-sac and then mate. Just a pawn move and it’s all over.

I am not going to get bogged down in that one. The boys in the Chess Forums
can debate that query. At the moment the hot topic is Carlsen’s poor form and
the reason (so they say) is the fact that our Magnus has got himself a girlfriend.

(No idea how they know that affects one’s play. Most of them don’t have a girlfriend.)

Two games showing the f6 and Qh6-g7 mate. One is a golden oldie, the other is an
RHP game. The latter is a very good game. It’s not only the GM’s who have all good
games on their C.V. Some of the guys here can play a good instructive game of chess.

We are not finished with game because I have seen the move h6...


...suggested as defence. There is still some very instructive play.
It contains another f5-f6 idea and well worth noting and storing .


Now a perfect example of the f6 idea coupled with a Knight on d5.
What I like about this game is the educational way White seems to
glide into a good position with logical play. Makes chess look easy.

(also note how I’ve linked Oldrich Duras to both games. Blogging is an acquired skill.)

Paul Motwani an excellent writer and teacher of the game,
(he's not too bad at playing it either) yesterday started up
his own blog to celebrate his 54th Birthday. Here is a link.

His Book 'H.O.T Chess' is a must have for any student of the game.
Hey! Red H.O.T. Pawn. I'll see if I can get Russ to rename this site.

(there is also 'C.O.O.L Chess' by Paul but I could not make
A Red C.O.O.L Pawn joke out that title so I will not mention it. )

Whilst looking for a suitable game for the story at the start of this blog I came
across a few other candidate games which will now feature in the Hall of Doom.

In all cases a player makes an unforced move allowing mate on the very next move.
This was going to be the original game for the story and then I found a better one.

Here is another game I was considering for the opening story.

In this next one I was going to have the Devil touch the White g-pawn.

Hollywood could use RHP games for background stories in 100’s of horror movies.

‘Four Blunders and a Checkmate’

The pride of the White Star Line (that will be the White King)
heads out across the Atlantic. It should have returned to port 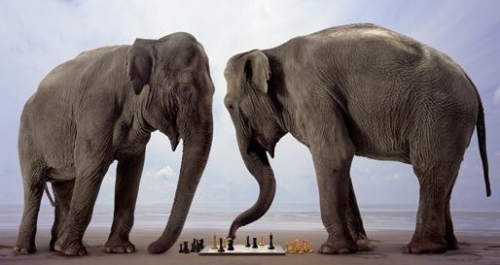