RHP mentioned in a non-chess book.

RHP mentioned in a non-chess book.


A few weeks back we look at a cock-up regarding a chess stamp with the wrong picture.
Look at this set of four chess stamps from Sierra Leone. Who is that on the top left stamp 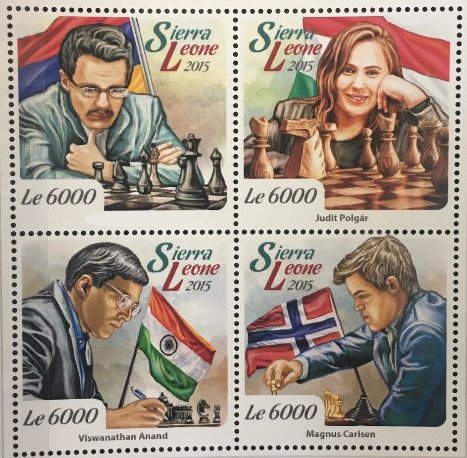 Answer at the bottom of the page.

Recently I had a reason to be going through this book..... 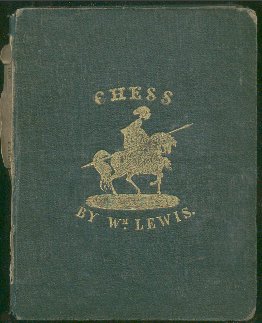 ....Chess for Beginners by William Lewis printed in 1835.
I noticed amongst the set of rules.

Notice that it does not say it has to be same colour of the promoting player.
(sharp eyed readers will also note that rule allows one to have two Kings. )


Instead of promoting the pawn to a Queen and stalemating Black.
(infact any promotion, a Rook, Knight or Bishop is still stalemate.)

White, according to Lewis in 1835, could have played 1.b8=Black Knight!


And mated Black a few moves later. (I like that Lewis Law)

More on Stalemates in a later Hall of Doom This should be in there
because again my sharp eyed readers will have noticed that back here.

I am not going to give the name, place and year.


Black to play. What happened next?

This next one is hard. I genuinely feel sorry for you.


White to make a move he cannot take back (that is a clue.)
This one for the real chess buffs. What happened next?

I finally did it. Page One of the One Day Ladder Tournament. I can now meet
my maker full of confidence and when he (or she) asks what I have done with
my miserable life. I shall point to this page and gushing with pride I’ll say:

“I made page one of the Red Hot Pawn One Day Ladder Tournament.”

I got the idea from a poster who asked way back in September 2015
wondering how long it would take to get to page one of the Ladder.

It took me 118 carefully chosen games selecting opponents who had played
a large number of games and had a rating of less than 1500. If given a choice
I’d choose the player who was playing the most games at that particular time
looking for and often getting bad T.M.G. errors (T.M.G. = Too Many Games)

Apart from forays into the occasional Hardcore Tournament I usually had just
that one ladder game to look at. Of course as I got closer to page one I could
not get the opponent I always wanted, some had very few games on the go.

But eventually I did it and although I cherry picked my opponents and played only
one game there were a few games where I had a lost position due to some N.E.G.
play. (N.E.G. = Not Enough Games.) I sacced unsoundly because it looked good.

Here is one encounter. it is not the worse lost position I saved. In some I was very lucky.

Back to books and this one recently came to my attention. 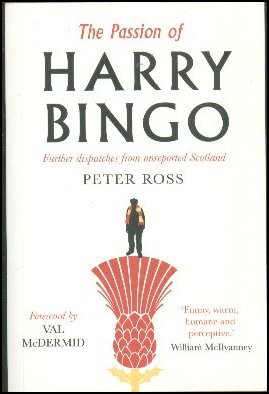 The author, Peter Ross is a journalist who gathers stories of the quirky and the bizarre
from all over Britain. Tales of the unsung heroes ( or complete whackos, it all depends
on your point of view.) His stories are hilarious, well written and always very interesting.

Peter interviewed me and other Scottish Chess players about 5 years ago. We all appear
in the book inside the chapter titled. ‘The Chess Players’ here are a couple of extracts.

And I must have mentioned Red Hot Pawn and this Blog.

There is more including me burning pots and pans and naming cats.
So put this one on your non-chess book list. It’s well worth it.

This week we visit the section labelled ‘Stalemate Disasters’

White tries not to stalemate his opponent but....

Next we see a very cunning plan. Sadly it was doomed to fail from the start.

White is aware that this position is a draw


The Bishop is of the wrong colour for the a-pawn.

But in this position from the actual game, if we add one Black b-pawn.


Can White force the Black b-pawn forward, take it with the a-pawn
and turn the White a-pawn into a White a b-pawn and win the game?

A sister position to the previous game. This time White has the correct Bishop


White played 93 a5 stalemate. The win is very straight forward.

The next game went to 102 moves. The win was thrown away with one move

Finally and this one does not belong in the Hall of Doom but I’ve nowhere else to put it.

What follows is actually a nice piece of alert chess. 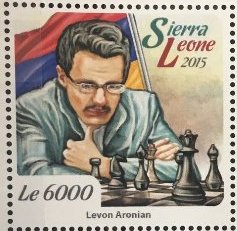 I think it looks nothing like lev Aronian. This is the picture the artist used 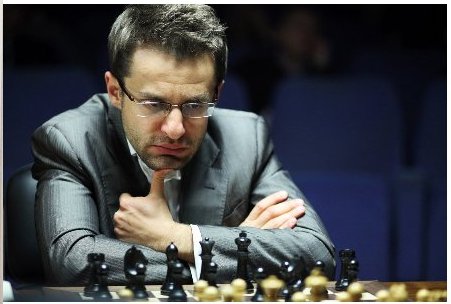 what happened next (answers)

Most will recognise this position (White to play)


It is of course Anderssen - Kieseritzky, London 1851 ‘The Immortal Game.’

But this actual position never appeared on the board. In that game Anderssen had
the black pieces but he was first to move. This is the position that Anderssen saw.


At that time the rule about White moving first was fully enforced.
Here is the opening title of the game as it was reported at the time. 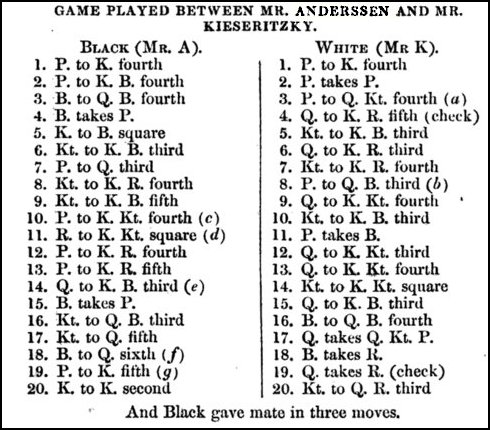 Now you can win a bet. Ask who was Black in ‘The Immortal’ and pocket the winnings.


Here White sealed his next move but he did not write down a move.
He simply wrote. ‘Aufgegeben’ which translates to ‘I give up.’