The 100 move Chess Maze and The Simpsons

The 100 move Chess Maze and The Simpsons


If you have just come out of a 3 month drunken coma then news to
you will be that Magnus Carlsen has appeared on The Simpsons.

I’ll put a link to the chess bit at the bottom of this page.
Meanwhile here are a couple of scenes from the show.

The episode is called: 'The Cad And The Hat' Homer is playing his dad at chess. 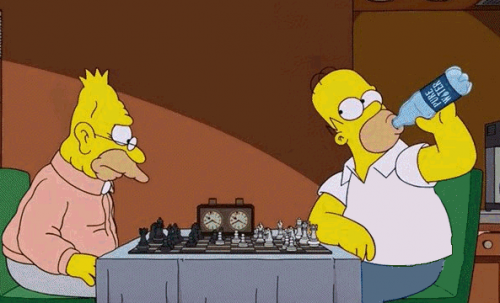 Moe is showing the game live (for a fee) at his bar. 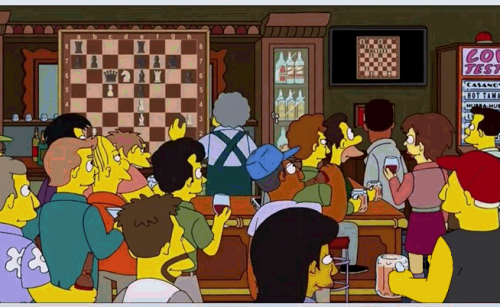 I wonder if Mo had any of this brew on tap.

The creators chose a real game to...

“....We interrupt greenpawn to tell you the game was: “

We join the game With Botvinnik about to play his 20th move.

This game won the Brilliancy Prize at Nottingham.

I’ve been looking for a funny angle as to why Botvinnik and Tartak....

“.....We interrupt greenpawn to say there is no funny angle we chose the game at random.”

Magnus Carlsen appears on a laptop in Moe’s I was...

“.....We interrupt greenpawn to say Magnus was not paid a fee.”

Greenpawn is fed up being interrupted.

“Greenpawn will be even more fed up when we sue him for using our characters.”

Chess is cruel. I can think of no other sport where your
mistakes can be frozen forever in a diagram for posterity.

I was looking at this game from the current USA Championship.

Black to play the most plausible move and lose.


Black resigned. The pawn is immune due to Ra8+.
Black now either loses a Rook or is checkmated.

Needless to say RHP can supply a matching example.

Remember last Blog and I introduced you to mazes, well BigDoggProblem
enjoyed them so much he sat down, composed one his own and it’s brilliant.

Here is a 100 mover Chess Maze. There are a few new rules.


White goes first and only the King’s move.
No King is allowed to move into check.

The object of the exercise is to get the White King to e1.

This entails marching the King all the way around the edge of the board to d6
and the White King takes the pawns on e5, d4, c3 and d2 and then move onto e1.

The more observant amongst you will already see a problem taking the pawns.


You can only take a pawn if the Black King is on g7.

So now you start to see the idea. You have to time the White King’s arrival
to a critical square perfectly and to do that have to keep going back to the
triangle of squares h4, h5 and g4 to lose a tempo to reach the key position.

This is the key position to reach with White to move.

You have the choice of Kh4 or Kh5 to time your arrival correctly to take a pawn.
To take the e5 pawn go to h4. Having taken it you then run all the way back to g4.
Then with White to move the King goes h5 (losing a move) to take the next pawn.

One of the beauties of this composition is that these are only squares on the
whole board that White can lose a tempo so the Black King is on g7 when
White is in a position to take a Black pawn. and you need to do it three times.


Here is the maze the King runs back and forth through.

White has to two ways to win the Black Rook for a-pawn.


One wins and one draws. First the draw.

Now the correct way. I have given enough hints.

This appeared in CHESS in August 1967. (I coloured it in at work)

It never ceases to amaze me, everytime I browse the finished games
page on R.H.P. I always manage to find a Hall of Doom Candidate.

Thank You. My only regret is the one’s that have escaped me. But I
warn you, me and blunders are magnets. I will find them...eventually.

Black is a piece up. (on RHP that means White is winning.)
There was only one way Black was going to get mated

This time we see the whole game. I was attracted to one by the final position.

I’m going to have a few words here. Guys look at this.


You can chase the Black King all over the board but you will never mate it.

Here is a perfect example, quite a few RHP Queens have been lost this way.

The Queen is useless without back up. Leave her alone until all your minor
pieces (that is the Knights and Bishops) are developed and you have castled.