The Curse of the Electronic Chessboard

The Curse of the Electronic Chessboard


Hello again and first question of the day is...What is this?

It is infact the mascot for the 2018 Chess Olympiad which is being held
in Batumi, Georgia from the 23rd of September to the 6th of October.
I have not been able to find out the turtles name. All I can find is ‘The Turtle.’

The dates are important because the World title match between Carlsen and
Caruana starts on the 9th of November. Will both take part in the Olympiad?
It leaves 34 days to prepare for the World Title match being held in London. 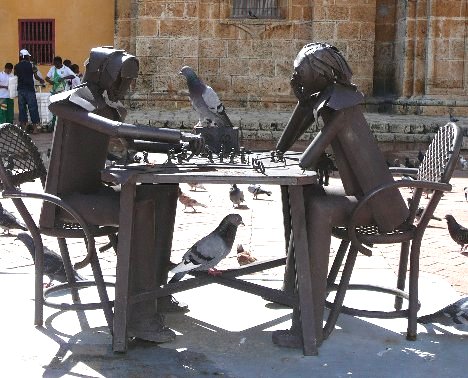 It does appear Magnus Carlsen could do with a few weeks of endgame study..

I’ll mention later how to lose by following Rules of Thumb
but if a World Champion can blunder then so can we all.


Here Magnus did what are all told to do, capture towards the centre. 52. hxg4.

Of course it’s always good fun to have a chuckle when World Champions blunder.
It is the curse of the electronic score board because years ago these things did not
exist and many such blunders played by great players went unrecorded and unseen. 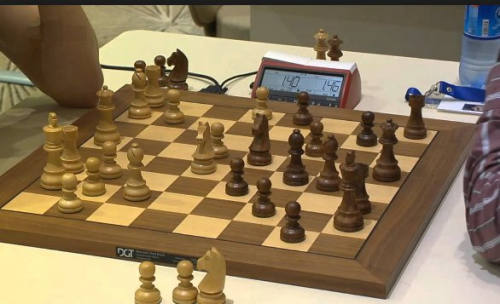 They are wonderful contraptions that record every brilliant move and blunder
and, under the right circumstances, they can even decide the result of a game.

The controller or indeed the players have to be careful when telling the
onboard computer the result of a game. It’s all done with King placement.


If White wins the Kings are placed on the central squares like this:


If Black wins the Kings are placed on the central squares like this:

Recently the game Wes So - Nakamura at Altibox, Norway (2018) ended in a draw.
The electronic scoreboard informed the rest of the world that Nakamura had won.

If we look at the final position: (White has just played 47.Kd4)


To stop the machine transmitting moves and telling it the game was drawn The
BK goes to e5, the WQ to d5. Whoever did this moved the Black King to e5 first.
The inboard computer registered this as a Black win and around the world went 0-1.

Of course with such a high profile game this mistake was soon rectified and people
corrected their database. But what about all the other stored wrong results between
lesser known players due to the same computer error. (which is the human’s fault.)

I have corrected seven or eight results on other sites where this error has occurred.
But these online database came from somewhere else and that source is still wrong.

Does it really matter if this ‘E-Board Virus.’ affects only a very small amount of games?

Well it does if you are on the receiving end and made to look silly.


Here with Black to move both players agreed a draw.

The Black King was placed e5 and because this was a legal move the computer
accepted and transmitted it. The White King was put on d5. End of Transmission.

But look at the position which is still on Databases everywhere.


Here with White to play a draw was agreed however in the process of
placing the Kings on the central squares the White King went to d4.


The move was logged and transmitted, now it appears Black can win easily
with 45...Kxb5. I wonder what both sets of team mates thought about this.

At least the E-Board Virus does not discriminate between the sexes.


The game was agreed drawn as neither side can make any progress.
The White King was moved to e4 before the BK was moved to d4.

All this is just worth mentioning in case you ever come across a modern
game that ends in an odd way. Consider that the last move was never played. 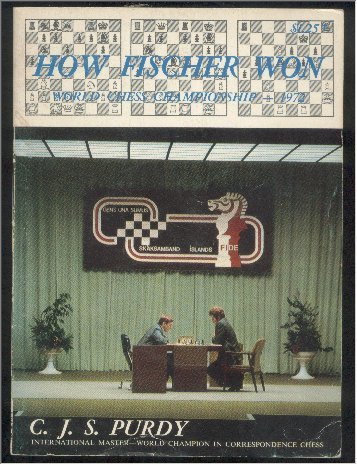 A good book. But what game is being played on the cover from the 1972 match?

Although it is impossible to tell from the picture the exact position on
the board. I can tell you, by a bit of expert sleuthing , it is from Game 4.

Fischer had White in the even numbered games. In Game 2 Fischer defaulted.
After game 6, which Fischer won (the game where he opened 1.c4) and before
game 7 the Russians wanted a chair for Spassky just like the one Fischer had. 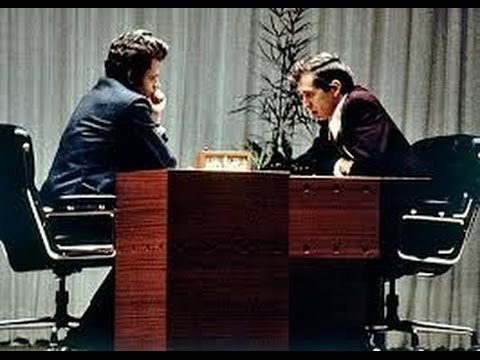 From game 7 onwards the two players sat in the same style of chair.

Though the position on the cover is hazy one can see there is a Black piece
in the heart of the White position and because we are only looking at games
4 and 6, only in Game 4 did a Black piece go into White’s half of the board.

If pushed I’d say this was the position on the cover of the book..


So, thanks to the chairs, the game on the cover of the book is from Game 4.

The players had a blitz Round Robin to decide the board order for the main
event, this happened when the current World Champion met his challenger


Caruana has got his Rook trapped on b5 he is not going to lose the
exchange White will get the King to a4 and win a whole piece 1-0.

A few were saying this was an original concept. Although it was impressive
to see it played in a blitz game there is, as they say, nothing new under the Sun.

And what have I been to up recently? Setting my usual batch of glasshouse traps.

All traps should have a pitfall like that, if they spot the main threat
(in this case it is mate in one) they relax, and miss the second idea.

This one (Black to play) is even more pitiful but I could not resist it.

Of course I do not win (or lose) all my game with traps spring or spotted.
Sometimes my opponents trip themselves up in a Rule of Thumb Trap.

Yes me again, but it does give me an excuse to show a great game (after mine)

This is the great game I promised you. Sit comfortably and open the popcorn.