The Ghosts of Old Chess Masters.

The Ghosts of Old Chess Masters.


It was Thomas Alva Edison who wiped out more ghosts, ghouls and goblins
than Van Helsing when he invented the electric light bulb in the year 1879

Before we all saw the light we had to make do with wax candles and these things
were not to good at lighting up rooms or corridors. They shimmered with the any
soft breeze causing moving shadows on the walls and our imaginations did the rest.

But the mediums began to thrive and these table knockers were putting people in
touch with relatives who had passed over to the spirit world or contacting everyone
from Sitting Bull to Julius Caesar, from Isaac Newton to...Paul Charles Morphy!

And so it came to pass that inside the August 1924 Austrian Chess Magazine the
‘Neue Wiener Schachzeitung', Max Weiss (1857-1927) wrote an article about
a Dr. Streber who presented him with an unknown Morphy game played in 1908. 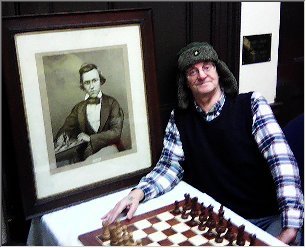 A picture of me and one of Morphy that I....er...painted.

Now every Louisiana schoolboy knows Morphy died (sorry passed over) in 1884
so this had to be wrong. However Dr. Streber attached, along with the game, a form
signed by three witness’s saying that Dr. Streber had played Morphy’s ghostly spirit!

(why Morphy would want to play the good doctor when he can have a game with
Steinitz, Anderssen, or even Pillsbury in the Afterlife Chess Club is suspicious.
Maybe the only other player to manifest himself that night was Howard Staunton.)

The game was published, people suspected it was a hoax (no kidding!)
and it was discovered that the game Morphy v Dr. Streber was infact:

Which is indeed a great pity because if it was so easy to summon up the spirit
of a past master then chess books could come with an Ouija Board and the spirit
contact password (a bit like logging onto a chess site but without all the insults
one gets from the forums) we could then get the past master to explains things to us.

Here is the game in question. (It was claimed Morphy was White.)


It has appeared 67 times on Red Hot Pawn and sadly 13 players of the White
pieces have missed that Black has the Queen winning threat Nf6+ and Qxd4.

The chief culprit is the attractive looking 7.Nd5.


Which looks like it forces 7...Qd6 when 8.f4 wins a truck load of material.
Black springs the trap with 7...Nf3+ and Qxd4 and ‘trap’ is the correct term.
A genuine chess trap must have a flaw which if spotted can reverse the roles.

The best way of side-stepping the trap is 7.Nb5 which holds the White Queen and hits c7.


And from here Black has been getting checkmated in a few moves.

This weeks puzzle is fairly easy. White to play....

Don’t fret, it’s easy to see what to do, it’s just the doing it that is the hard bit.
I spotted the idea fairly quickly but used the solution given instead of solving it.

From the above diagram we have to get to here.