The Hunt for a 1990 Chess Magazine

The Hunt for a 1990 Chess Magazine

I have been clearing out my wee study, actually that is a lie. I was looking for
something else and became amazed at all the junk I have that I no longer need. 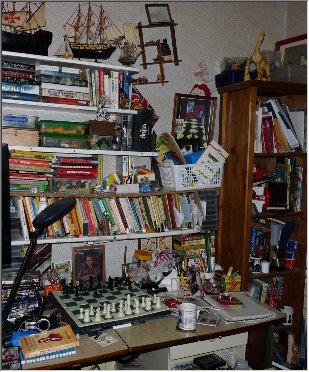 Loads of notebooks full of master games from the 70’s. I used to copy them
out from library books, now days of course we have home computer databases.
I bravely binned the lot along with old tatty/torn football/speedway programmes.

Dozen of unread non-chess books, the result of going for the five for £1.00 bundle.
These took me and my grumbling son four trips to donate the lot to a second hand shop.

100 of desk toys, clutter, junk and odd stuff that I have gathered over the past 30
years since moving to my current address.. It took three trips, again dragging along
my grumbling mumbling son (he is not very bright but he can carry heavy weights)
to dump the whole lot in the municipal bin. I now have space for more piles of junk!

I was looking for this...

...and in particular this bit.

It is a seven page article basically proving that the 1910 Lasker - Schlecter match
was for the world title and it’s not true that Schlecter had to win by two clear points.

I also found (re-discovered) a 2005 newspaper (The Metro) that had this in it.

I honestly cannot remember if I dumped this on you lot in the past. Hopefully not as
I cannot stand these things. If it’s not got a chequered board then I am not interested.
However some of you may be up for it so the solution is at the bottom of this piece.

One thing I found was an advert sent to me by Fat Lady (remember him - we still keep in touch)
It reminded me of a blog I did here and when I checked it out I thought I would run over it again.

Do you feel you are drifting though existence without a purpose?
Has sorting your DVD collection into alphabetical order lost it’s appeal?

Worry no more and cheer up. Introducing....

Shelve the books, put he pieces back in the box, get out the needles and knit, knit, knit.

But beware! the woollen base makes the pieces slippy and they
tend to slide across the board and onto a square you never intended.

(Here I posted some Queen slide blunders, I’ll now use some 2019 examples.)


16.Qc4+ was the possibly intention. Instead the Queen slide to f6 knocking over a pawn.

I suppose there is a whole bunch of chess terms and openings jokes
I could now add relating to knitting. Alas all I can come up with is;

The ‘Weaver’ Adams and the Cardi-Gan (Caro Kann or Catalan).

(Enough of the Knitted pieces jokes….Russ)

This game also came from that old blog. I’ve redone the notes.

The 1990 BCM also furnished this Sam Loyd problem. White to play and mate in three.


It’s a toughie, time pressed (and lazy) after five or so minutes I sought the solution.
Turns out it also proved too tough for another solver who thought there a mistake
in the diagram (I too think like that if stumped ) so they swapped over the two Kings.

Both solutions at the bottom of the page.

I had the opportunity to try one of ‘those’ piece sacs in a recent game.
I am of course talking about playing Nxg4 in this type of position.


I want to show you this variation as it highlights just how much danger White
was in and the advantage of being able to 0-0-0 with such a Black f3 pin attack.

When you can and cannot play such a sacrifice depends of a few factors.
Can you put pressure onto the pinned Knight and hopefully win it back.

My advice here is if you can see that it does lose right away just go for it.
You will see it fairly often , there are 3000+ examples on RHP with Black
playing this sacrifice and White showing a minimal edge by about 200 games.

From the White side there are 4,500+ examples and Black(!) is currently just
edging over White regarding wins. Draws with both colours saccing are few.

Here is an example of the same sacrifice by Black..

And that is what you call ‘noting up the winner’ seeing the 1-0 criticizing
everything Black does and praising White. But hidden in there were ideas.


Instead of 13...a6, which was too slow. 13...Na5 hits the Bishop and has plans for a c6.
After this the play gets tricky and White has to play very carefully to stay on the board.