The Pawn Sacrifice and No.5.

The Pawn Sacrifice and No.5.

So I’m sitting looking out of the window when the fifth best
looking girl in the office comes waltzing up and sits besides me.

“Hi “ She smiles looking all pleased with herself.

“What do want number five?” I asked glumly.

“I heard you moaning about that film you wanted to see was not being
shown in Edinburgh so I downloaded you a copy on this USB stick.”

“Santa Clause Conquers the Martians......I just bought it on E-Bay.”

“No dummy, ‘The Pawn Sacrifice’. I watched it last night , it’s a good film.”

And away waltzed No.5 and I’m left staring at an office stamped USB stick.

I yelled after her , “This is company property No 5.” She gave me the finger.

Well I’ve seen the poor reviews by all who have seen the film and I was
expecting the worse. But it’s good. Yes there are loads of factual mistakes
but only chess players would notice or care about anything like that.

I suspect that half of the sad ones were trying to work out Fischer’s
grade during the picture. The other half were just looking for errors.

My only tut-tut-tut came when Bobby opens up a Russian Chess magazine and plays
1.h4 h5. But 334 RHP games have opened this way with Black just winning the majority.

There is a good bit in the film where Fischer shows Lombardy how he could have
beaten Petrosian at Zurich in 1961 and I’ve not seen anyone have a look at this bit.

This (to me anyway) is surprising because after the film it was the
first thing I looked at. I guess the others were too shocked to see
Fischer in bed with a lady or had overdosed on the factual mistakes.

Here is a snap shot from the film. (thank you No.5) 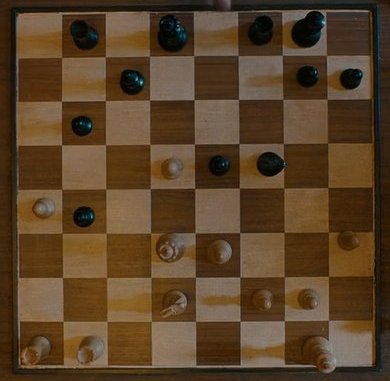 And here is the actual position.

Merry Christmas from Merry Carlsen the winner of the 2015 London Classic. 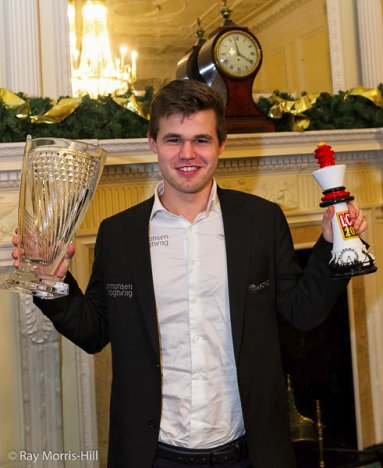 All that effort and he ends up with a glass vase and a bottle of washing up liquid.

All year we see RHP games (mostly the wonderful blunders) so for
a slight change I’ll give some recent OTB games from the FIDE Open
that ran along side the London Classic and was won by Benjamin Bok.

If so inclined you can go to the official site and download 973
FIDE Open games. Not a single one was a Berlin Defence!

OK. I’ll do it. Every year I promise myself I won’t but I always end up doing it.
I am going to use a note that every chess hack since Howard Staunton has used.

This next one has that sticky sweaty smell of time trouble about it.

This next game also hints at mutual time trouble.

And now as if on cue a ‘’Pause before Promoting’ example with a happy ending.

RHP regulars will recognise this one. Over the years (this my 201st blog on here)
I have plastered this site with many examples of this ‘I think can win this’ tragedy,
A player tries to dodge a perpetual thinking they are spite checks and gets mated.

And now as if on cue, despite being two Rooks up Black had to settle for a perpetual.

And now as if on cue, Benjamin Bok saccing two Rooks in the last round
of the Fide Open thus ensuring he is the sole winner of £5,000 first prize.

Well that’s it for this year. Work has me tied up till the 2nd week in January.
I have no time off at all but all that overtime will I suppose pay a years bills.

Merry Christmas and all of you have a Happy New Year.

The thread accompanying this blog is Thread 166684