Hello readers of the Junction,

Today we’ll be following up on last week’s dissertation with a dissection of the actual chess games from several relatively high-profile chessboxing matches (i.e. the ones which were filmed online with a board.) First up is coverage of the most recent tournament I have video of from the London Chessboxing page: the International Chessboxing Brexit Belt.

Invert BoardPGNComments
1. d4 d5 2. c4 Nf6 {By no means an obviously bad move, but generally frowned upon in favor of dxc3, e6, or c6.} 3. cxd5 Nxd5 {The reason? e4, a move White wants to play anyway, then comes with a tempo.} 4. Nf3 Bg4 5. Ne5 {Pushing back the bishop, and sticking an uncomfortable knight in Black’s position.} Bf5 6. g3 f6 7. Nf3 {This allows Nb4, forcing a white knight to a depressing square (Na3); for this reason Nc4 (with Nd3 following) is a little better.} Nc6 8. Bg2 {First, I’d prefer Nbd2, which prepares/threatens e4. (There’s no reason for spacially-advantaged White to consider the inferior Nc3 Nxc3 bxc3.} Be4 {Poor. This doesn’t really benefit Black, and worse, it allows Nbd2, and later e4, with tempo.} 9. 0-0 {White misses it, opting to play more cautiously.} e5 {This smacks to me, though, of an obvious mistake: White is castled; Black isn’t. Black shouldn’t be opening up the center like this.} 10. Nc3 {Again, White should have played more aggressively; dxe5 blows open the center, leaving White with a number of attacking options.} Bd6 {This move, however, is the worst yet: a straight-up blunder. Black loses the bishop.} 11. Nxe4 0-0 12. Nxd6 Qxd6 13. e4 {This blocks the h1-a8 diagonal for White’s g2 bishop; it’s not terribly damaging, but Makinen doesn’t need to hem in his own pieces.} Nde7 14. d5 {Altogether, we enter the first round of boxing with the game nearly over; White has, in essence, both an extra piece and the compensation for it (in terms of his space advantage.)}


It’s important to note, in my boxing commentary, that I’m even less qualified to offer it than I am my chess advice. That being said, it’s half the sport, so we’ll plunge in with aplomb. (Aplombge? No. Let’s forget I ever typed that.)

The first round of boxing was fairly energetic.It was clear that these are amateur boxers. They leave a lot of openings that I’m sure more skilled athletes would exploit. A lot of punches do land, however, and it does underscore the importance of both of chessboxing’s components. Being repeatedly hit in the head can’t be good for your ability to play chess immediately afterwards. About two and a half minutes into the three-minute round, Makinen (White) is sent to the ground by a fantastic left hook from Cohen, and it’s several seconds before he recovers and manages to finish the round.


You’d expect the dynamic to change from here on out: it’s becoming clearer and clearer that Black is lost on the board, so he must be progressively more aggressive in the ring for a chance at victory. The second round, though, is a little more sluggish. Fighting is difficult, especially for repeated rounds with only short intervals of rest. There remain brief exchanges of blows, as Cohen presses the assault, landing a series of rights.

Most notably, though, as the announcers point out, there’s quite a bit of holding, almost entirely initiated by Makinen: “He’s just trying to survive.”


That’s only half-true, however; it would also be entirely accurate to say that Black brought about this result. Cohen had nary twenty seconds remaining on his clock; though you can’t overtly stall in chessboxing, he clearly took more time than was strictly to take the game to a third round. Cohen used his time well: almost immediately, Makinen’s nose was bloodied. After substantial holding, though, with each player exhausted, the game reached its conclusion.


Likely, the early blunder upset the competitive balance, but it’s interesting that both sides ended up struggling to hold on in their respective areas. I’d imagine the ideal chessboxing player would be more well-rounded. Let’s see if we’ll get a better match in the next game.


So far, it does look like the match is moving in rational fashion, albeit rather slowly: both players are taking their fair share of time. The trend continues in the first round of boxing, which is rather more cagey and methodical; there are fewer frenzied punches. Little emerges with a nosebleed, and does much of the movement. He’s nearly fifty pounds (21 kilos) lighter– If Bjorknas needs to change tactics and press an assault, it’ll be difficult to cope with Little’s mobility.


Black, though he received first aid during the game, was bleeding on the chessboard. In the second round, though, he continues to have the upper hand. The announcers discuss Bjorknas’ lack of power despite his strength, and the most damaging punches thrown are a series of Little’s jabs. Though he’ll almost certainly have to win boxing, White wasn’t spurred on by his blunder, and he comes out of the round no better than when he started.


The chessboard is cleared from the ring, and Bjorknas doesn’t really have an answer to Little’s strategy. Instead, he’s reduced to following, and produces very little.


He hadn’t accumulated much success in the previous boxing round, and this is Bjorknas’ last hope, granted to him by Little’s less-than-clinical play. Indeed, he comes out swinging, approaching more aggressively than before, and lands several damaging clusters of hits. Despite that, though, the final bell sounds, and Little concludes the victory with little fanfare.


Following this exchange, however, White summarily defeated Arnott in the ring; despite his worse position, therefore, 1-0. It’s disappointing for perhaps the best chess player on the day to be taken down in boxing, but it speaks to the balance of the sport: a player must have a minimum level of skill in both disciplines. This baseline does address one of the major criticisms of the sport: that Mike Tyson would be the chessboxing world champion. More realistically, Tyson would be checkmated in the first round of chess.

There are, though, rather low benchmarks a player must meet. The sport isn’t at the level where it can attract the best players, and, more to the point, the best fans. It’s a fact perhaps best exemplified by the announcer’s comment “Queens move diagonally, as well as up-and-down and side-to-side” halfway through the first game. I can’t speak with any great expertise to the boxing, but the chess, at least, doesn’t have a great deal of substance to it.

To what degree is this objectively true, though? Is this empirical, qualitative observation confirmed by what semblance of hard data we can extract from the sport? That’s a question for next time.


I’ve recently begun an effort to more deeply analyze the games that I play, and I’m starting small but consistent. 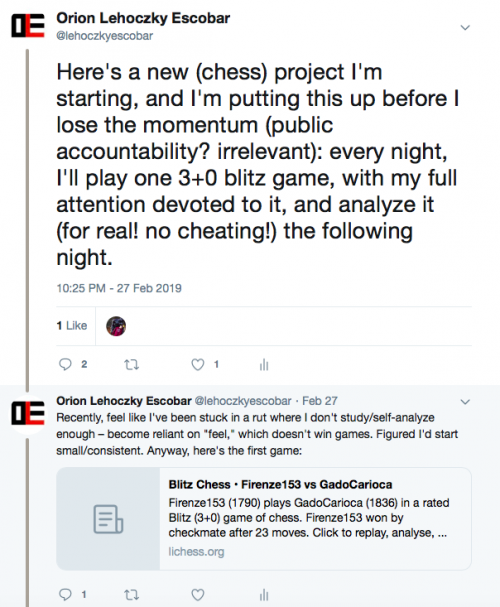 Here’s the first, hopefully, of many games. (Don’t worry; I won’t post them all here.)


I think the next post should be the last one concerning chessboxing, attempting to think about the wider trends in the sport’s chess games. Best wishes until then.