Taking On the Traxler

Taking On the Traxler

Hello everyone, and welcome to the only chess blog on the internet that speaks to clients on the phone about quantities and type of copier paper. As I mentioned several posts ago, I’ve been re-watching episodes of The Office, set in Pennsylvania, and there’s a scene where one of the main characters (Jim, played by John Krasinski) plays a game against one of the other office workers.

To make a long story short, if you google: (“wilkes-barre” “krasinski” “chess” ) the first result is the following delightful little minature:


While we’re talking Estrin, I should show you my copy of his Traxler addendum that I keep forgetting to give back to my friend. (Not returning chess books seems to be an unfortunate theme of this blog, but so be it.) Here it is: 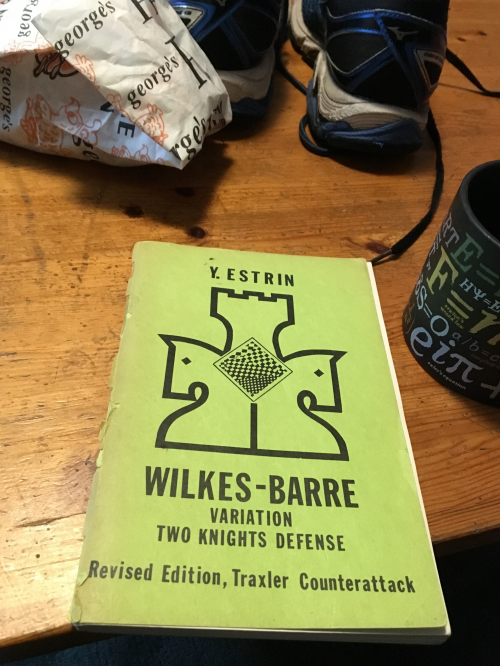 At least for the Wilkes-Barre variation it’s a fantastic book, and I recommend reading it if possible– with a chessboard out, preferably, and not a computer screen, though I do recognize the hypocrisy of that idea when you’re reading these words through one.

One of my favorite games Estrin is his contest against Hans Berliner, who employed Estrin’s favored Two Knights Defence. (I will never understand why, having been paired against Yakov Estrin, you would try to beat him at his own game. Then again, it was the year before England, of all countries, won the world cup, so maybe the game was an omen of strange things to come.)


Here’s a video that goes a little further in depth on the same game, made by the excellent kingscrusher.


When I was researching this blog, I decided to see if I had any similar Traxler games. Turns out, I won a Traxler tournament on RHP way back in 2015. Several of these games weren’t the best, but there was one I thought might be helpful to look at more closely, as it showcases how knife-edged the opening can be.

Invert BoardPGNHeadersComments
[SetUp "1"]
[FEN "r1bqk2r/pppp1ppp/2n2n2/2b1p1N1/2B1P3/8/PPPP1PPP/RNBQK2R w KQkq - 0 1"]
1. Bc4xf7 Ke8e7 {The best response, as it leaves f8 free for the rook.} 2. Bf7b3 {It’s also best to withdraw the bishop straightaway– once the rook takes up its position, it will be threatened, and it can&#039;t do anything on f7.} Rh8f8 3. Nb1c3 Bc5xf2 {This sacrifice seems ultimately unfounded– it wins a pawn but ultimately leaves the Black king more exposed than its White counterpart, with the kingside knight removed.} 4. Ke1xf2 Nf6xe4 5. Kf2g1 Ne4xg5 6. d4 {This move opens up the center of the board, freeing White up to attack the king while winning a tempo by hitting the Black knight.} Ng5f7 7. Bb3xf7 {This is my first mistake, and with the benefit of hindsight it’s transparent that exchanging the dominant bishop for the misplaced knight makes little sense.} Ke7xf7 {Forced as otherwise 8.Bg5 wins the queen.} 8. Qd1h5 Kf7g8 {This is the sequence I had anticipated, but I’ve instead chased the king to it’s natural position, losing the main advantage I had.} 9. Bc1g5 Qd8e8 {Rf5 was another option, pinning the bishop.} 10. Qh5h4 {I avoid the queen trade, but at the cost of another pawn.} Nc6xd4 11. h3 {Frees up the knight, which had been guarding e2.} d6 12. Nc3d5 Rf8f7 {Defending c7.} 13. c3 Nd4e6 {Unfortunately, the knight is kicked back to a space where it&#039;s similarly comfortable.} 14. Bg5e3 {This move preserves the bishop, but forces the knight to an unsuited square. Bd2 is no better, so why not let the bishop be traded and bring out a rook instead?} c6 15. Nd5b4 Ne6f4 16. Ra1f1 Nf4e2 17. Kg1h2 Qe8f8 {Be6 or a similar move is better– both sides are re-moving their pieces unnecessarily, while neglecting their undeveloped pieces.} 18. Rf1xf7 Qf8xf7 19. g3 {I believe the logic behind this move was to play Kg2-Rf1 as a method of activating the rook. However, it’s terrible looking back, as there’s no reason to, unprompted, weaken the kingside by so much.} a5 {There’s no reason to kick the knight back to a better position– Be6 first is clearly superior.} 20. Nb4d3 Bc8e6 21. Rh1e1 {Control of the f-file is more important, as the knight can’t be immediately removed. there aren&#039;t many better moves– Kg2, for example, walks right into Bd5+, so Re1 is as good a try as any.} Qf7f3 22. Qh4e7 {An obvious mistake, but the game is lost anyway.} Qf3xg3 {0-1.}


I plan to resume weekly (or close to it) service of this blog, so I’ll leave you with the gospel of greenpawn, in the comments of Blog Post 132: