I started my journey armed with two critical facts: It was Boxing Day, and the Wu-Tang Clan make excellent music. If you can’t see where this is going, stop and listen to the below. Or, even if you can.

[Disclaimer: some profanity. (It’s the Wu-Tang Clan; what did you expect?)]

There was only one problem, I discovered, as I attempted to piece together a chessboxing-themed blog: it’s really hard to find any actual chessboxing games. Substantial-time-Googling hard. I emailed several supposed governing bodies of chessboxing, the majority of which didn’t respond, although I did get one email back several months later (02–20–2019, for those of you keeping score,) from London Chessboxing. I posted in several chess forums, including this site’s, and got a few leads over in r/chess. It was on.

The first lead I got was from someone online claiming to know Matt “Crazy Arms” Read. The second was a link to the London Chessboxing Twitch page, which had one archived video, only to find that the organization had posted the same video on Youtube.

It’s not perfect (i.e., it’s not a PGN, so I had to transcribe the games therein) but it got the job done. So did the video I was linked to following my brief correspondence with the London Chessboxing representative:


The sticking point for me, though, before I get to any chess, is: why was this so difficult? As much as I’d like to chalk it up to my own incompetence, I simply don’t think that’s the whole explanation: finding these games, to me, seems like it should have been trivial, and instead it took quite a bit of work. To answer this question, I think we need to answer another, directly related, question: why is chessboxing so small?

Chessboxing appears geared for the internet age. Ideally, it seems as if the sport should be able to appeal to two fairly large, distinct groups of fans; that’s why the gimmick works: if the chess World Championship crowns “the world’s smartest player,” the chessboxing World Championship should determine “the world’s strongest, smartest player.” Both boxing and chess are depth-heavy activities, too, by which I mean that there’s a lot to explore within both categories. Neither feels tacked on, either, there’s an equal balance between the two. Perhaps most importantly, it’s ideally suited for clips: in fact, the vast majority of any video I was able to find via my initial searches were either short promotional videos or eye-catching snippets of climactic moments.

However, despite how well-positioned chessboxing would seem to be to make it big, it– hasn’t. This is somewhat baffling to me; it seems to be a concept with which almost all the chess players I know are familiar, although I imagine it might not have such exposure within the boxing community. Now, I imagine there may be some quibbles from the peanut gallery given the perhaps uncharacteristic assuredness with which I am approaching this particular topic. Is it, in fact, accurate to state that chessboxing is failing despite its name recognition, varied appeal, and moment-heavy format? That depends on your definition of failure.

Let’s pause for a moment for a brief art break.
[Disclaimer: I did not make this. (A friend made it, and subsequently gifted it to me.)] 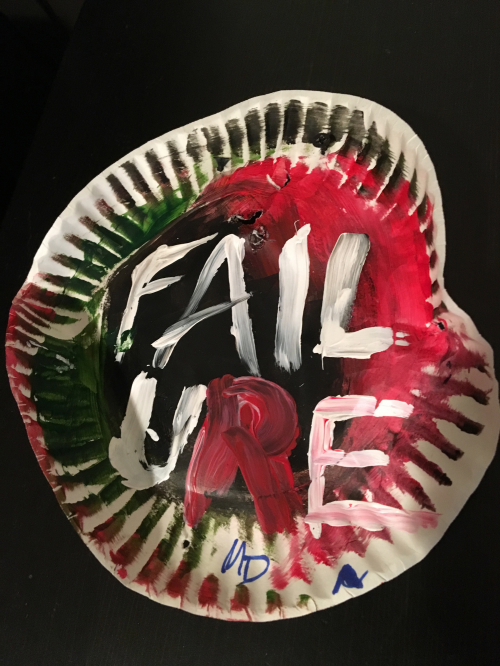 Now, what, in this context, must we define failure as? Let’s compare chessboxing to some similar startup sports. The most obvious comparison would be to one of its constituent activities (chess or boxing) but that’s clearly unworkable. Instead, we’d have to compare it to the most similar sports, the criteria being the following:

1. A compound sport, defined as the fusion of two existing sports. 2. Requires skills from both of these component sports (i.e. not Frisbee/Foot Golf, or similar.) 3. An individual, competitive sport. 4. Invented (relatively) recently: 21st century preferred, as that squares with the chessboxing timeline. 5. Requires a similar level of infrastructure, so as to not unfairly disadvantage chessboxing.

Under these criteria, I could barely find one sport: headis, “a mix of table tennis and the heading of association football.”
– https://en.wikipedia.org/wiki/Headis


Even this seems like a mismatch; it’s not really the same type of fusion, outwardly similar as it might be. Part of the problem is thus revealed: chessboxing’s lack of internet presence and organization is compounded by its lack of a true equivalent. If you can’t describe a sport simply, you can’t convince people to watch it seriously. Instead of its own sport, therefore, it’s merely treated as the bastard child of both disciplines by its prospective audience.

This barrier seems to screen out anything without a vested interest in either component, Almost exclusively, then, the fans would seem to come from either chess, or boxing. A natural question then follows, though: where are they? Here is where the main problems lie: not in the perception of the concept of the sport, but in its execution. Fans from both sides don’t respect the ability therein, in part because it’s an amateur sport thus far. The best boxing showcased is relatively amateurish, and the best chess (which we’ll take a look at next week) is similarly disappointing.
Nikolay Sazhin appears to be the Heavyweight world champion. His rating is variously listed on Wikipedia and the Chessboxing Global website as in the 1900s. On the same website, Leonid Chernobaev, the Light Heavyweight champion, is listed as having a rating of 2145. The only Leonid Chernobaev in FIDE is rated 1997. When I began my research, I expected it to be easier. That fact, I think, is why it wasn’t.

Getting a new sport off the ground is a difficult task, but the World Chess Boxing Organisation was founded in 2003. Its website shouldn’t return a 404.

See you next week.