Hello all, and welcome to Hikaru Junction. While I was looking through my few binders of chess scoresheets, I happened upon something rarer than a game score. I came across an original Orion masterwork, stuffed in amongst the myriad records of past tournaments.

The below is several years old, the opening half-page of a chess comic I was going to write and draw. Unfortunately, it comes from the time before I allowed myself to accept I was skilled at neither. 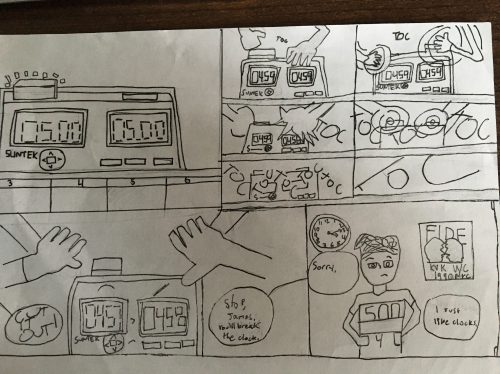 Although this may be of great archeological significance, I’m nevertheless forced to turn us from these diversions towards the main topic of the blog– the games which I was searching for in my Romney-esque ‘binders full of chess games.’

“I do get the occasional PM along the lines of : "I won a game because of something you had shown." “

“Next week, I think it’ll be a return to something with some more dense chess. Maybe prompted by this thread. Thread 178298” is a direct quote from my post Blog Post 396, and I thought I might finally follow up on my months-old promise.

Since I’m a big fan of the blog, my mind immediately turned to anything I’ve employed in my own games. One of the things I’ve most concretely nicked from The Planet Greenpawn is an opening I quite enjoy playing– the delayed exchange in the Ruy Lopez, which GP discusses at some length in Blog Post 39

As such, I retrieved some of the recent games I’ve played over the board with the opening to see if I’ve done a decent job of implementing it. Last week I mentioned my thoughts on playing lower-rated players. This week: higher-rated.

That Position, My Favorite Line

I remember that game fairly well, despite it being almost four years ago (which, geez,) because it was the first time (or close to it, at least) that I had beaten a player rated over 2000. I was coming off this hot streak, 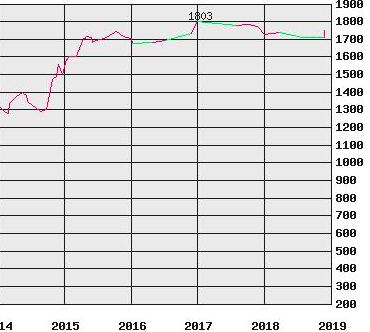 and winning this game was a continuation of it to me; the victory was a sign that I could do anything, that I could play with these more sophisticated ideas, and keep progressing. Though I obviously recognized that the win was due to his blunder, and me capitalizing, I attributed part of it to my opening. And so I kept playing it.


And, inexplicably, I kept getting wins. This illustrates one main point: the time-honored truism that the last blunder decides the game, and the importance of capitalizing on them. In these two games against higher-rated opponents, I was given one opportunity in a losing position, and was alert enough to land the knockout punch, despite that blow being my first.


That one wasn’t a win, but I thought it was interesting, and hey, that’s what’s important, right? In any case, I think this rather long draw is a testament to continuing the theme running through the previous few games: that when you’re playing higher-rated players, they want you to give up. Perseverance, trying tactics, being aggressive when it counts– those are all things that they hate.

I feel this way most when those opponents push back; it’s when they make it difficult that it is difficult, and as much as that’s a tautology, it’s also true. When you’re playing a higher-rated opponent, make them beat you, because sometimes they can’t. They’re human, and they make mistakes. Punish them for it.


Funny, how when it so often feels like you can’t persevere or push through to grind out that win, when just as often you blunder a won position, you can seek out the flip side, and it makes everything okay. Thanks, @greenpawn34, for giving me, and all of us, some tricks to get there.

See you next time.