The program uses an opening library stored on disk. The opening book is a text file containing a list of positions ( in FEN notation) along with the number of white wins, black wins and draws achieved from each position in the past (either from Rival's experience if opening book learning is enabled, or from the games from which the opening book was created).

The benefit to chess programs of using opening libraries is open to question. Many opening sequences lead to positions in which one side is down in material but the position is such that this loss can be made up within several moves. This is a situation that chess programs find hard to understand. Unless the recapture of material is within sight (i.e. within the search depth) on the program's next move, the program is likely to make a move that allows the opposing side to maintain the material advantage.

Rival had no response to this position in its opening library and played 5. …D6-D5?? White's response of 6. D2-D3 won the knight which could not escape without leaving the black king in check. When Rival made its fifth move it almost certainly believed that the loss of the knight could be avoided by responding with 6. …F8-B4+. 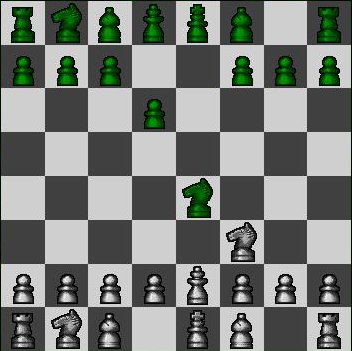 If black had searched deeper it would have first noticed the loss of the knight and would then have realised that the loss could be prevented with 5 …D8-E7. However, the use of its opening library lead it to a position in which it was uncomfortable. Rival would have made the same mistake if it had been playing the black pieces in this situation although the move 5 …D8-E7 has since been added to the opening library.